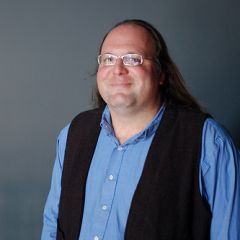 I’m just back from the Global Voices summit in Santiago, Chile. My headache hasn’t quite receded from the 970ml beers at 777 Alameda, but I had two flights and a long drive home to start processing the lessons of four days spent with dear friends from around the world – who happen to include some of the best minds in participatory media. 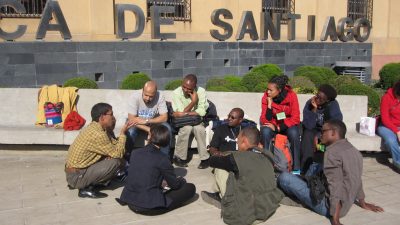 A breakout group at the GV summit, at the Santiago Public Library

We’ve thrown five summits so far, including our inception meeting at Harvard in 2004, and from each meeting, an informal theme has emerged. For me, the theme of GV Santiago was “love or money?” This isn’t a new question for most nonprofit organizations, or indeed, for anyone involved in citizen media. Money’s generally a lousy reason to start a nonprofit or to write a blog. But the issue is layered and nuanced, as I started to discover through our discussions about what makes Global Voices function.

For the past year, we’ve been considering an interesting problem that confronts media as a whole – the Babel problem. As I’ve written elsewhere, the internet is becoming more multilingual as people, organizations and publications from all over the world come online. If you, like me, are a mostly monolingual English speaker, you can read a smaller percentage of the Internet every day. And if you live in the US, the meltdown of advertising supported journalism means that you’re getting less coverage of international news… which means we might need to find ways to unlock important citizen or professional media coverage in Laotian or Latvian.

GV’s been a pioneer in this space. From early on, we’ve been translating blog posts from over thirty languages into English so they can reach a broader audience. For almost four years, we’ve been offering editions in languages other than English, relying on volunteers to translate articles they’re interested in and want to share with their language communities. The question we’ve been asking this past year: does it make sense to try to use Global Voices to translate other types of content?

There’s a mercenary aspect to this question, of course – if Global Voices could somehow be transformed into a translation services bureau, the resulting revenue could allow us to support more bloggers in disadvantaged communities, document more threats to freedom of speech online… or simply fly our friends to cool corners of the world more often than once every two years. But there’s a mission-driven reason as well – so long as translation is expensive and difficult for media outlets, they’re unlikely to feature views from people who don’t speak English (or whatever language their readers/listeners/viewers speak.)

Marc Herman, who’s been working hard on this issue for GV, provocatively offered this formulation: “How do mainstream media organizations deal with translation? They don’t.” I tweeted this comment and got immediate pushback from my friend Richard Sambrook, formerly director of BBC’s Global News division, who pointed out that BBC is now producing content in many languages and translating between them, incorporating views expressed in many languages. But BBC is the exception, not the rule – language is a barrier for many news outlets and can prevent local views and opinions from coming to light.

Given GV’s mission of amplifying voices that go unheard, it makes sense that we might consider helping media by translating local voices, especially in the context of breaking news. But GV’s also a volunteer driven organization – the vast majority of the people who produce our content aren’t compensated financially (more about this in a moment.) Volunteers aren’t always able to drop everything and translate comments for a breaking news story about an earthquake or a protest – if we wanted to offer this service to news outlets, it might make sense for us to compensate translators for their timely responses.

This idea – as well as the broader idea of offering money to people in the GV community translate content from, say, a Haitian Creole newspaper into English – brings up the apparent paradoxes around love and money that make GV work. It takes thousands of people to produce the content that shows up in a month’s worth of Global Voices, and only a couple dozen are compensated fiscally. We pay our full-time staff – our executive and managing directors, our managing editor, our technology director, our directors of advocacy and of the Rising Voices project – and we pay salaries that are badly below market rates and we don’t provide meaningful benefits. (Everyone is treated as a contractor, rather than as an employee.) Our editors, who are responsible for managing whole regions or languages worth of content (“North Africa and Middle East” is a region for Global Voices, but so is “Francophonia”) are paid $800 a month, with the expectation that they put roughly 20 hours a week into the job… in other words, slightly above the US minimum wage. We pay some of the coordinators of our lingua (translated) sites… but only the ones where we’ve been able to secure funding. The others volunteer… as do all the lingua translators and the authors who write posts about a particular post or issue, who collectively represent about 90% of our community. And we don’t compensate the bloggers, videographers, photographers, etc. whose content we feature on the site. (And no, we don’t pay board members either. :-)

We do compensate people in other ways. Authors and translators who are especially productive get invited to our biannual summits, and we pay for travel, hotels and a modest stipend for meals. This isn’t cheap – given the global distribution of our community, we’re not talking about bus tickets, but airfare from, say, Antananarivo to Santiago. Being featured on Global Voices can be a big boost for someone’s journalistic career, and we know of many people in our community who’ve leveraged experience with Global Voices into a paying job.

But most of the compensation is in love, not money. People work on Global Voices because it’s a chance to represent their community to the wider world, to show people the fascinating conversations taking place in their local blogospheres. They translate to preserve their language, to ensure that there’s content online in languages like Malagasy or Aymara, to share their work with friends and neighbors who don’t read English. They do it because they’ve fallen in love with the mission, or the people behind the project, or the joy of doing something more meaningful than what they do every day at work. (I heard a wonderful story from a GV editor who stayed at a miserable job longer than she should because it gave her a fast internet connection and a good opportunity to translate content for GV on company time.)

Given our surplus of love and surfeit of money, you’d think we might move towards a system where we ask people to do more for free and less for pay. But certain things are hard to buy without money. By paying a talented tech director, we make it possible for him to pay the rent without taking on other consulting gigs which would prevent him from answering our desparate phonecalls at 2am when the site goes down. And being able to spend money means we’re able to get contributions from parts of the world where there’s less of a culture of volunteering… or less ability for people to volunteer. GV based entirely on money would be untenable – it would cost millions a year, and be impossible to sustain. But GV based entirely on love would likely be unsustainable in its own ways – it would end up overly reliant on and representative of those who are lucky enough to not worry about money.

That’s the backdrop against which these conversations about money play out. I’d been interested in the idea of GV launching a translation service because I thought it would provide opportunities for our talented and undercompensated translators to make money using their skills. Several translators pushed back against the idea – they translate for GV because they’re fascinated by the content, because they enjoy choosing what they work on, because they’re able to take the time to do a careful, thorough, loving job. Adding money to that equation could – would? – break what works.

What happens when money comes into other corners of the GV world? Bernardo Parrella, editor of Global Voices in Italiano, has negotiated a deal where La Stampa, Turin’s largest newspaper, features Global Voices in Italian and pays a significant sum to GV to support reporting and translation. I was thrilled to hear about this deal. We’ve been fighting an uphill battle for over five years to get mainstream publications to feature our work – having a respected paper compensate us for our work as well as featuring it seemed like a huge step in the right direction.

Excellent questions. GV chose the most liberal of Creative Commons licenses – attribution (or BY) – because we wanted other media outlets to have as few barriers to entry as possible if they wanted to use our content. Rebecca and I were working on GV in part because we worried that international media coverage in American news outlets was poor and getting worse – we knew it was a struggle to get any (non-crisis) developing world stories into the media and didn’t want to put a payment barrier in front of La Stampa or anyone else who wanted to feature content from Madagascar or Morocco.

Was that the right decision? I don’t know. The closer I look at Global Voices through the lens of love and money, the more I realize I don’t know. It’s disconcerting, like looking at the insides of a piece of technology – the engine compartment of my truck, the innards of my laptop – that I rely on but don’t completely understand. I don’t get how the pieces all operate, so I’m reluctant to tinker with any of them. Instead, I close the lid and hope that everything keeps functioning smoothly.

If you want your truck to crank out more horsepower or to run on biodiesel, you’ve got to understand how the engine works, not just shut the hood and ignore it. There are aspects of GV that I wish ran better – I wish we were better at covering some parts of the world, better at having our content featured in mainstream publications, better at providing opportunities for the people whose love keeps our community going.

Understanding how to tune the engine of any organization that works on both love and money – and what organization doesn’t? – requires some deep understanding that I don’t yet have. I know it when I see it working: TED’s amazing translation project, producing 7,000 talks translated by 4,000 volunteers, including 70 languages – required a huge investment of money to build a technology infrastructure that now runs primarily on love. Wikipedia has used love to build the world’s largest encyclopedia… but has discovered that love alone doesn’t produce sufficient content in some of the world’s neediest corners. Now it’s trying to use the money that love has attracted to build out some of the smaller Wikipedias to serve huge populations of poor people.

So much I don’t understand. And so I close the lid and pray it just keeps working.