Various formats and alternate versions of the GV Radio branding.

Greetings Comrades! Jeremy the Tech Director here. Now that our community radio station is up and running we need to finalize it's name and branding so we can promote it properly. I've been working with Rising Voices director Eddie Avila, who's been working with a team on the GV Radio project, to create visuals to go with our two main name choices, which as the title of this post implies are pretty similar to each other.

Internally we've been referring to the radio stream as “GV Radio” which is nice and short and we all understand it, but it's not ideal for the public who probably don't know what “GV” refers to. For the main branding we want to include the “GlobalVoices” letterform, giving us two obvious name choices: “Radio” before GlobalVoices, or after it.

To me “Radio Global Voices” has a fun, “radical” kind of feeling to it, while “Global Voices Radio” is simpler and more natural.

As you can see from the contact sheet above, the artwork works pretty well either way, so we're curious if anyone has opinions on which name is better.

So far we are leaning towards keeping it simple with “Global Voices Radio”, since that's what we've called it so far and it's the most natural “long form” of “GV Radio”.

But what do you think? Answer the poll below!

About the radio tower logo

We chose to use a tower as the icon for our radio station because we feel it captures the essence of broadcast audio in an internet age. Some of the other ideas we considered for the artwork were microphones and headphones, which are natural objects to represent sound, but don't really differentiate between “radio” and podcasts or other types of audio. Unlike podcasts our station is always broadcasting and as a result offers serendipity (finding things you didn't know you wanted) rather than the control we often expect from modern media. Hopefully the radio tower icon will convey the product (streaming audio) without straying too far outside the existing Global Voices branding.

The icon is based on Radio Tower by Rohith M S from the Noun Project, where there are tons of Creative Commons licensed vector icons representing just about anything you'd need. I chose this one because of it's strong, simple lines (important for small versions of the logo) and because it integrated well with our Adinkra icon. Check out the icon's profile to see how many other “radio tower” themed icons they have available.

Let us know what you think!

See any problems with this new branding for Global Voices Radio/Radio Global Voices? Which color options do you like best? Think we're crazy? Leave a comment :) 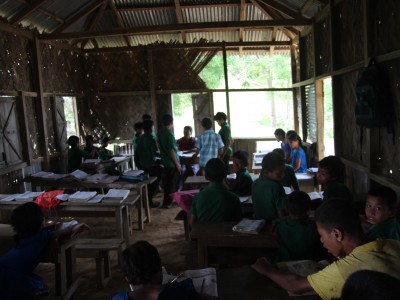 The Light House of Hill-A School : Indicating the necessity of Asset Based Development

Useful tools for you to use in radio #1: Writing a radio script Introduction to Audacity for Recording and Editing Audio