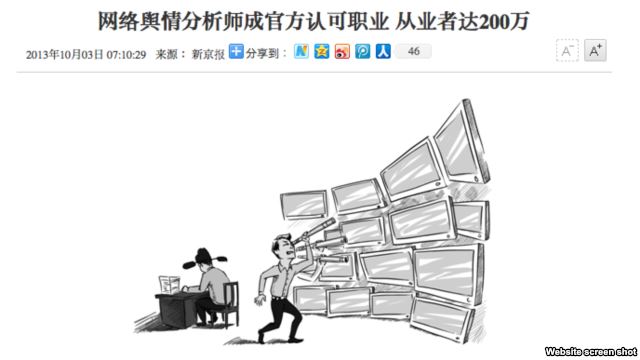 There are around 2 million Internet public opinion analysts in China. Image from Voice of America.

It has been getting more and more difficult to collect online public opinions on Chinese social media because of heavy censorship.

First, machine censors are capable of deleting critical posts that carry politically sensitive words within a few seconds. Second, the censors can also hide the writers’ posts from the public timeline without notifying the writers. Third, if any netizen has written something that s/he cannot back up with evidence to prove the information is factually correct, s/he can be charged with spreading rumors online. Fourth, the more independent public opinion leaders have been threatened and “tamed”; a number of prominent figures were publicly humiliated with high-profile arrests and accusations such as financing protests or prostituting in early 2013.

A majority of netizens have chosen to keep quiet, while some have migrated to messaging platform WeChat in order to express their opinion to a small circle of friends. The online public sphere has come to be occupied by millions of “civilization armies” coordinated by the Communist Youth League to spread “positive energy”. It is very difficult for observers to find out what exactly is the mainstream public opinion on critical issues by looking to Internet conversations.

Some of these reports are leaked documents, such as the evaluation report on the public opinion channeling efforts at Yenching Academy, that are distributed internally among party members who are responsible for coordinating the channelling of online public opinions. These reports carry invaluable information on how exactly the government and Chinese Communist Party manipulate online information and how they learn from each single incident to improve their opinion channelling skills.

The second type of reports are available online for public access. For example, party-affiliated people.cn has a section on Yuqing (public opinion) and most of the reports are written by public opinion analysts who make use of big data analysis, review both mainstream and online public opinion and propose policy improvement.

Of course, most of the public reports are not politically sensitive and they are written in a positive spirit. Yet the reports do highlight some important social problems with very solid information and data. If we “reprocess” these, we can help outsiders to understand Chinese society better.

How to report on these without parroting the official line? Here are some of the steps I follow:

1. Ask a different set of questions

Most of the report are written from the government point of view with an attempt to find a solution for the concerned issue. For the opinion analysts, their question is how the government should address the problem. Often times, they miss or avoid digging into the cause of the problem. When reprocessing the information, we can start with the more basic questions such as what causes the problems and answer those for readers.

2. Fill in the missing explanations

To avoid addressing political conflicts, usually there are some untold parts in the reports, such as debates, dark humor jokes or critical comments. Try to fill in the missing explanation by searching on Chinese social media or dissent sites.

3. Identify the keywords and cross-check with uncensored platforms

Overseas Chinese sites and Twitter are quick in picking up hot topics in China. It is always good to cross-check what's been written in the pro-government reports with dissent and uncensored platforms with a round of keyword searching.

4. Dig into the background of the online incident

The background can help you to identify what is missing in the official reports and add context to the story.