Lingua Tech: All your posts on all your sites!

Hi GV! I'm Jeremy the Tech Director of Global Voices. Along with our coding contractor Carl, I've been working on a really big update to the plugins that control the Lingua translation system. Today we're launching the first piece, so I wanted to share it with you to avoid surprises and share our excitement :)

The overall goal of this update (as well as a few recent ones that already launched) is credit. We want all GV contributors to get credit for their amazing work and we want to make it easy for you to show off how much you've contributed to our mission. We've always made sure to have your beautiful faces and diverse names as a major design element on the site, but there were some backend limitations that worked against us. Recently we had a batch of important changes that made credits display more accurate and detailed, but there were some lingering limitations, and the coming updates will address them.

Today: Posts will show on your profile on all sites, even if your contribution was elsewhere.

The essence of this change is that posts you write will be listed in your user profile on any site where the post exists, even if you worked on that post on a different site. This fixes the problem where your posts would only show on the site where you wrote/translated them, even though you had a profile on a site that they got translated into.

To illustrate this we'll look Lova, a prolific contributor in both English and French, who writes and translates in both languages. Yesterday he had 122 posts on the French site, and comparing his latest posts on each shows how none of them match:

Lova's recent posts on each site before the change, nothing matches because the system didn't know which translations were originally written by him.

After today's change he's instead showing 406 posts in French. Not because any new posts were added, but because we're more accurately displaying which posts on each site relied on his hard work:

Posts Lova wrote now show on both sites as long as a translation exists! Note that the posts don't line up perfectly because the translations are posted at different times than the original stories.

This is a subtle but important change, and one that's been requested many times over the years. We hope this will make your author profiles an even more valuable space to show off your work!

Note: Not all posts will show up in the new format immediately because the update only happens when a post is viewed. So far the updater has already found and upgraded about sixty thousand posts, but it may be awhile before every single post you worked on is visible on every site. If you want to speed up the process for yourself, just visit your different profiles and use the “Older Stories” links to click through to each of your archive pages on each site and make sure all your posts are up to date.

The change described above is great, but it's really just a stepping stone towards the real goal, which is to allow multiple people to share credit for a single post or translation. 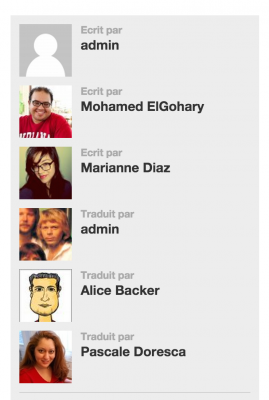 Prototype demo of a post with three authors and three translators, which hopefully will never happen!

There are many cases in GV where groups work together on stories and in the end no single person can really take all the credit. We've long wanted a way to assign multiple authors/translators as the creator of a post, but doing so is very complex because we not only need to show all those people on the story, but on it's translations, crossposts and translations of translations!

Well it's not ready yet, but the database changes and infrastructure to support it are now in place, so it shouldn't be long. When it's finished the feature will allow both original posts and translations to have multiple people credited, and when it's used all of the selected authors/translators will have the post visible in their profiles (similar to what I described above, but within and across sites).

Thanks for your attention, keep an eye out for bugs!

As with any new feature this latest update may cause unexpected behavior. If you notice anything funny happening with the credits for posts, attribution or the Lingua system in general please let me know at webmaster@globalvoices.org