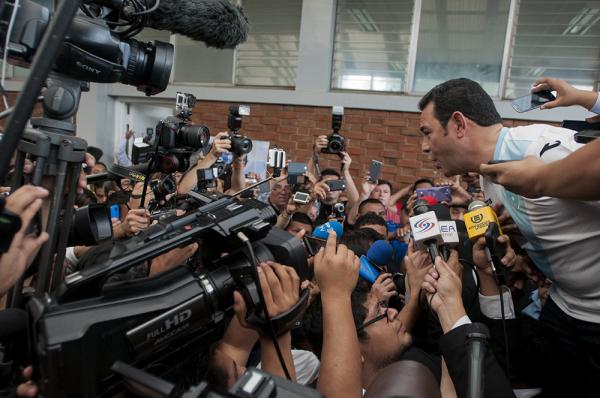 This article was written by Carlos Arrazola for Plaza Pública de Guatemala and thanks to an agreement on the dissemination of content, was published on the CONNECTAS website. The article is also available here on our site, in accordance with our publishing agreement.

Ten hours before winning the presidency of Guatemala, Jimmy Morales, a candidate for Frente de Convergencia Nacional, FCN (the National Convergence Front, NCF), appeared for the first time since announcing his candidacy in public with his wife, Patricia Marroquín, and his three sons (who, according to Morales, had been staying outside of the country during the political campaign for “security reasons”).

Upon arriving at the polling station, Morales, in jeans and a Guatemala football jersey, was met with cheers, applause, sparklers, kisses, and hugs from a sea of adoring supporters and followers. Journalists also swarmed him, trying to capture the moment on camera, while hoping to get an exclusive scoop or statement, all to no avail.

Just as was the case during his electoral campaign, Morales avoided all questions regarding what his government would be like.

Ten hours later, on October 26, 2015, a victorious Jimmy Morales, clad in a blue suit, white shirt, and light-blue tie, held his first press conference as President-elect of the Republic of Guatemala. Again, he was met written applause, cheers, congratulatory messages, hugs, kisses, and more applause. “Glory to God!” some shouted.

Journalists crowded Morales and camera flashes, selfies, and questions followed, as media outlets flocked the scene hoping to get an exclusive interview with the new leader. Once again, the new President gave a speech—which he read—full of generalizations, sweeping statements, cliches, and continual invocations and praises to God.

His first message was symbolic: the table from which Morales addressed the journalists was arranged in such a way that it revealed those who would form part of his government. To his right, next to his wife Patricia, sat Colonel Edgar Justino Ovalle Maldonado, the founder and face of the NCF who was also elected as a member of congress last September, and Flor de Maria Chajón, also a recently elected member of congress, close friend, and team member who assisted Morales in establishing Morelejas, a TV program. Chajón also worked as a financial advisor on Morales’ campaign and is a producer who helped Morales expand his career as a comedian. She is also the founder of the civic committee, Nación.

To his left sat Jafeth Cabrera, his running mate in the presidential election, and most visible ally who will act as the chief political operator in the coalition. And standing a meter's distance from the table was his brother Sammy, also his partner and advisor, observing the scene with a smile of satisfaction.

It seems as though Jimmy Morales is unable to explain openly and clearly what his government's priorities will be. He also has not named who he has chosen to form part of his cabinet, nor has he clearly pointed out the public policies that the executive branches of his government will implement.

Furthermore, Jimmy Morales has again resorted to simple, abstract concepts which shed very little light on what concrete actions he will use to fight against corruption, the chronic problem which sent ex-presidents Alfonso Portillo and Otto Perez Molina, and their respective ex-Vice Presidents Francisco Reyes Lopez and Roxana Baldetti, to prison.

If I you give the example as the leader, there are more possibilities and trustworthiness to demand middle management and lower management to act without resorting to corrupt practices”; legal compliance: “there is a framework which must be respected”; accountability: “it is important that political actors are accountable so that through the media, the population is aware of what the government has done; who is doing it, how it is being done; why it has been done.”

These, he said smilingly, “are the three propositions” for putting an end to corruption.

In less than two months, the President-elect must be able to demonstrate his political negotiation skills, independence, and ability to compromise firstly with members of his own political party and groups that supported his political campaign, and then with opposition parties and groups that influence government decisions.

Between April and September, some Guatemalans made international news as they filled the Plaza Central de Ciudad Guatemala to protest against corruption and the political system, sending a message to the candidate who later would win the next presidential election:

#It'sOnlyJustBegun. 14th January “We will return to the Plaza to send a clear message to our next leader, congressmen, and all other civil servants: we the citizens will be on the alert and will be all the more organized”.

To read the full story (in Spanish), click the banner below: