GVers Pick their Favourite Tweets In Tribute to David Bowie 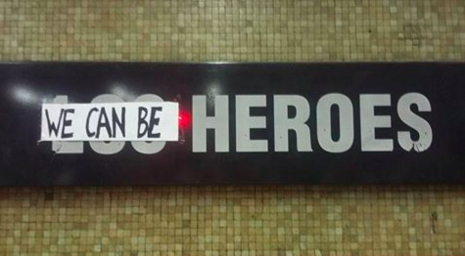 We can be HEROES sign in a metro station in Santiago de Chile. Photograph shared by @CathynaCathona on Twitter in tribute to David Bowie

Last week, we asked our Global Voices community for tribute tweets for English singer and musician David Bowie as part of an exercise on using tweets in posts. Bowie died at the age of 69 after battling liver cancer. BBC describes him as “one of the most influential musicians of his era.” Many on Twitter share this sentiment and have been tweeting their hearts out since his family announced the news.

Here are some of your favorite tweets.

From Chile, Elizabeth shares the photograph above by Chilean Twitter user Catyana Catona of a metro sign in Santiago de Chile. The name of the station Heroes, has been adapted to quote one of Bowie's songs, also named Heroes. According to Wikipedia, this song, written in 1977, has been cited as Bowie's second most covered song after “Rebel Rebel.” What a brilliant way to remember Bowie!

Tanya Lokot, from the Ukraine, shares this tweet by Elena Cresci, social and community editor for the Guardian:

This story about Bowie and a quote from his recollections about playing near the Berlin wall is important to me as a former Soviet child because it speaks about a part of our history and about the role of art and artists and regular people who emerge as heroes.

And Juan Arellano, from Peru, shares this tweet by Paco Bardales, a writer and film producer who tries to put things in perspective for those saying how ridiculous it was for everyone to love Bowie now:

Hey hipster: YOU DO NOT OWN BOWIE
Let the world love him.
Get over it.
Get over yourself.

Bowie at the bar: How Let's Dance put an outback pub on the music map https://t.co/ZzGXvB5B7S via @@abcnews

“This is where I met the first love of my life and his name was David Bowie.” (Starmania) I was Ziggy in 1989 and now I feel like an orphan -Solal

(Editor's note: The sentence in bracket is part of the lyrics of a French song called “Ziggy”. The song is part of a musical called “Starmania” in which the lead changes his name to Ziggy as a tribute to David Bowie).

And last but not least, Marisa Petricca, from Italy, selected this tweet by Asia Argento, actress, musician, producer and daughter of the most famous Italian horror movie director Dario Argento. Asia, one of Italy's most famous actresses abroad, tweets to her 260K followers:

“He could be dead, he could be not, he could be you… He's Camelian, Comedian, Corinthian and Caricature” 💔 pic.twitter.com/9OIlWrnr5m

Thank you for taking part in this exercise and see you again next week with a new installment of our Writing Tips.

A Tip Sheet for Writing With Tweets

Community  May 31, 2019
END_OF_DOCUMENT_TOKEN_TO_BE_REPLACED
Cancel this reply