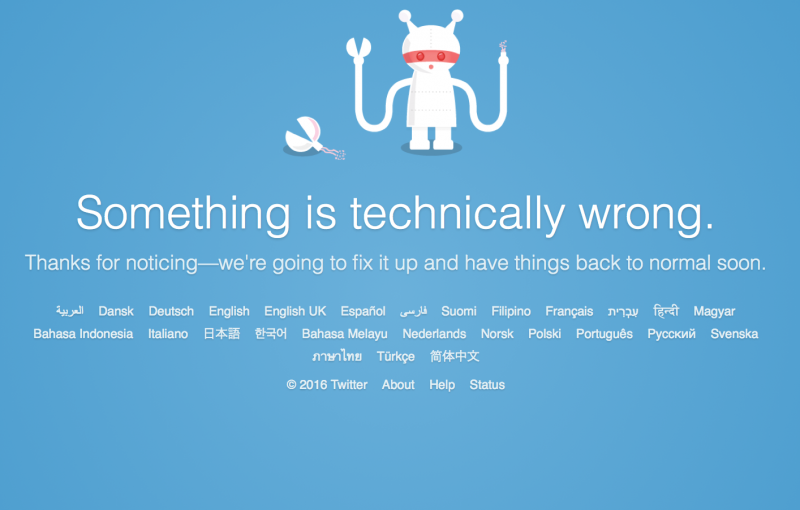 Twitter's failbot: Twitter has been down worldwide and there's no news when it will be up and running again

Horror oh horror! Twitter was down today and there was no news of when it would be up and running again (It's back up). For some, especially governments, this was good news for obvious reasons. For the rest of us, particularly news junkies who depend on Twitter as a constant supplier of news and views, mostly of the gloomy variety, it was bad news indeed. Personally, I was horrified that I would have had to depend on Facebook for my news fix.

This brings us to the topic of our next installment of Writing Tips, which today will focus on using Facebook sources for our posts. For more than one reason, Facebook isn't my favourite news haunt. In 2011, I saw sane people I thought I had known well, well enough for me to befriend turn ugly, cheering on the murder of people just because they joined the so-called Arab Spring bandwagon and went on a protesting spree. “Kill them all! Traitors!” one of my Facebook “friends” wrote. I would like to think that I have a lot in common with friends, but this thirst for blood is certainly not one of them!

However, for the purpose of this exercise, let's leave my bias aside, and learn what Facebook has to offer us in terms of resources for writing our Global Voices Online stories, for there certainly are invaluable resources and voices on Facebook. In fact, many pundits (you can laugh out loud as you read this) called the Arab revolutions of 2011 the Facebook Revolution, because they were, you know, started on Facebook. Similarly, Arab governments poured their wrath on the Internet and online activists because the Internet made the people revolt, and not things like injustice, inequality, poverty, police brutality and dictatorship.

Posting material from Facebook pages, groups, or individual profiles can be tricky, as sometimes content that once was publicly available is subsequently made private by the user.

There is also an ethical perspective to consider. Many people using Facebook still don't realize that their images and content may be taken and used in a news context. You may need to consider the implications of including an individual's name and comments made on Facebook in a story. Will it put them in danger or affect them at all?

A good rule of thumb is to only use content that is freely available in the public domain, i.e., that can be viewed by anybody and is not restricted to Facebook friends of the individual. Always try and link directly to the comment or comment thread.

However, if news is broken on Facebook, then it is permissible to use information or material from a personal profile. Please discuss with your editor.

Groups and pages are different. If anyone can join, then the content is in the public domain. Bear in mind that some Facebook groups need approval to join, in which case the use of that information or material should be discussed with your editor.

Moving on to technicalities, here are some more instructions:

For the moment, we don't use Facebook's embed code because if the Facebook publication is ever deleted, it will also disappear from our post. We also avoid using screenshots of Facebook publications because they are not readable by visually impaired people and are hard for translators to manage.

To quote from a Facebook publication, simply copy the text, paste it into a post and wrap it in a
“blockquote” tag. Be sure to include a link to the original publication.

So to recap, only use material from Facebook pages open to the public. If there is something specific you would like to quote, discuss it with your editor. Alternatively, reach out to the people/groups you would like to quote and get permission from them to use their material. Establishing direct contact with people you quote for your stories goes a long way.

For today's exercise, I would like you to suggest a Facebook page you frequent and tell us why you like it and what you get from visiting it in the form below. Yes, it should absolutely be your favourite page on Facebook! Please make sure the page is open to the public (and is in English).