Nour's Quest for Freedom from Raqqa to Berlin 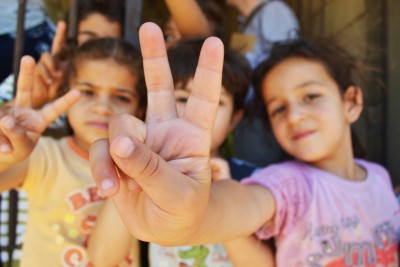 The story of Nour was originally written by Marie Bohner on Global Voices in French. The text was translated by Laura Macfarlane.

Nour* is a primary teacher, she is 38 years of age. Nour is also Syrian, and was still living in Raqqa just over a year ago. After passing through Turkey, she has today managed to reach Berlin, where she awaits her enrolment in a refugee camp with her two children. Nour is not the first to tell her story. Because their stories are simple and we understand them, each single testimony could be the one which is able to distance us a bit more from the catastrophic vision of a shapeless and uncontrollable tide, inundating our European borders.

Raqqa, stronghold of Daesh in Syria

Raqqa is considered the self-proclaimed capital of Daesh in Syria, as it has been controlled by the organisation since June 2013, after a severe bombing campaign. The group, Raqqa is Being Slaughtered Silently (RBSS), documents extensively this situation on Twitter.

According to numerous articles, daily living in this city of 200 000 inhabitants has been profoundly altered, adding terror to a sudden rise in price of essential items.

Little by little, freedom is wasting away

Nour describes the gradual rise of deprivation of freedom, particularly as a woman, but also with economic restrictions. “In February 2014, I am forced to wear the full veil whilst practising my profession as a teacher. Some subjects like Physics or Painting are banned. In school, the girls and boys are segregated. My children had to give up their hobbies. Then I was forbidden to go out or drive a car without being accompanied by a direct male relative. All the schools are closed. My children are deprived of education, and I am no longer receiving wages.”

Amer Albarzawi, a Syrian man originally from Raqqa, has created the video “Fade to Black” to describe the very phenomenon.

In the article En une minute, Raqqa chavire, -Within a minute, Raqqa is overturned-, from the Courrier international, the artist explains:

One day, we were not allowed to smoke anymore. The following day, girls and boys could no longer go out together in the street. The month after, girls were segregated from boys in school, then they were made to wear the hijab [Islamic headdress]. […] I am Muslim but all of this is very unusual for me.

To live and die in a city at war

Nour comes from a fairly privileged social background and her husband is a dentist. He is also mistakenly a man of conviction. Thus very soon, “his wages are no longer payed because he and his family are non-religious and denounce the killings commited in Raqqa.” These financial difficulties as well as the lack of access to education begin to weigh heavily on the everyday life of the family, three of whom are children.

It is when trying to rescue some injured people that “[her] husband and eldest son die in a missile attack that was targeting their car along with a medical emergency group vehicle.”

Why do Syrians risk their lives to reach Europe? To escape from this:

Beyond the great sorrow of loss, her new situation as a widow brings a further threat for Nour. “After a period of confined bereavement at home, I fear being forced into marrying a soldier.”

Turkey, a temporary and insecure place of refuge

The fear of being forced into marriage and the solitude pushes Nour to seek refuge in the country which is initially most accessible (out of 4.5 million Syrian refugees in the world, 2.5 million could be found today in Turkey, according to Amnesty International on 3rd February 2016). “My sick father and my mother decide to take refuge in Turkey. I meet them with my two children. My youngest son Braïm is very affected by the death of his father and brother.”

According to a statement by Amnesty International en 2014 :

Barely 14% of the 1.6 million refugees from Syria live in one of 22 well-equipped camps set up in Turkey. But the latter have already reached their maximum capacity for hosting refugees. Therefore, there are almost 1.3 million Syrian refugees who are left on their own in Turkey. A very small proportion receive aid from humanitarian organisations. For food and shelter, families take desperate measures, sometimes even making their children work.

Nour, for whom there remains some financial resources on her arrival in Turkey, has been able to avoid the camps and the street. These reserves, however, threaten to run out quickly.

Economically, Turkey is to Syria what Switzerland is to Italy: an expensive neighbour. Nour reflects: “In July 2014, I [still] couldn't find work close to home. Living is expensive , transport as well. I am living with my family. Future prospects are non-existant.” 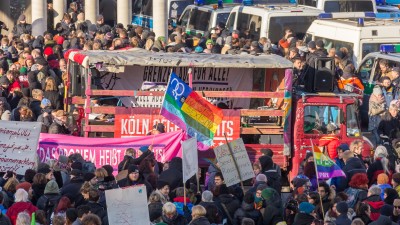 Despite its long face and bad manners, Europe continues to inspire hope among Syrian refugees. This is also the case for Nour. And if most Europeans hold on to their wallets, calling it the object of all desires, it would seem rather that it is Nour's values which are at the heart of her dreams.

“I hope to find the means to survive, to have the chance to start a new life in a free and secular country, where my children will have the chance of receiving a good education.” Following her instincts and braving many challenges, Nour is consequently in Berlin today. Let's hope that Germany, and also the European Union as a whole, will be able to prove to Nour that their values are more than the shimmering reflections of a distant and bygone time.

Beyond the economic and social basepoints, accepting or refusing Syrian refugees constitutes a test for our values.

* For the safety of the people, all the names have been changed.