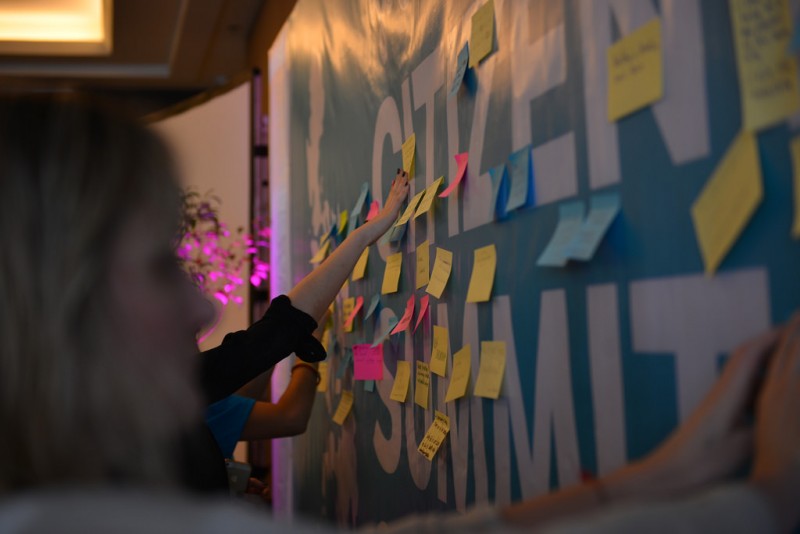 In January, we marked one year since the #GV2015 Citizen Media Summit in Cebu. Photo by Laura Schneider C via Flickr. CC BY-NC-SA 2.0

It’s time for another update from the newsroom — the place your stories go before they are published on Global Voices.

Something awesome this way comes…

Our executive editor Ivan Sigal will be sharing some exciting news soon regarding an innovative project that we will be launching. Stay tuned!

Zombie a-podcast-lypse? Global Voices once had an excellent podcast (check it out on the Global Voices Soundcloud page), but for various reasons it eventually fizzled out. Fast forward a few years, and we’ve now brought it back and turned it into a review of the many engaging stories we’ve published in the week gone by.

Check out the first two episodes:

In November, we relaunched our Instagram account as a community initiative.  Since then we have switched hands over 20 times, visiting dozens of cities through the unique lens of fellow GVers. Here are some of the beautiful places and stories brought to us by Mahsa, Juan, Marianna, Pernille, Lena, Prudence, Jillian, Arzu, Thalia, Georgia, Rezwan, Palash, Pauline, Firuzeh, Nevin, and Thalia.

After a successful but tiring day, we went to relax to Yarinacocha, a lagoon near the city of Pucallpa. It is a very touristic place and quite visited. Unfortunately, its port is in the midst of renovations, but we rented a boat and took a small tour of observation of local wildlife, especially birds. Then, with time being propitious, we stayed to watch the sunset. Don't envy us. #amazonia #travel #igerspucallpa #pucallpa #ucayali #peru #instagv #dayinthelifeofgv #viajes #travelpics #tourism #sunset #atardecer #charapa #instasunset #instamood #Yarinacocha #laguna #lagoon #amazonjungle #sunsets #sunsetsofinstagram #today

We had a few changes in the newsroom within the last few months.

A big thank you to Danica and Mary for all the wonderful, diligent work they put in over the years! We’ll miss you as editors, and look forward to seeing you around the community.

Sana Saleem also came aboard as Pakistan editor to experiment with ways to improve our coverage.

Before posts are published on Global Voices, they’re often looked at by a sub-editor, who might suggest a new headline, make some copy edits, or help shape the post in a way that a global audience can understand. This has been part of our recent efforts to make sure our content always supports our mission — building bridges of understanding around the world —  and our editorial code.

If you’ve ever written a story for GV, you’ve probably encountered these sub-editors. But who are they?

We created a short video to introduce the community to our small global team of sub-editors.

And remember, editing and sub-editing should always be a conversation. For more insight into the editing process, take a look at this Community Blog post: A Conversation on Editing.

In February, our 22 newsroom editors broke into four groups for a series of in-depth discussions. We brainstormed about creative ways to recruit contributors (GIFs, anyone?) and the different roles that contributors can play at GV beyond the author and translator titles.

We're making an effort to showcase our passionate and diverse community to the world by working together on community-wide collaborative posts more often. Here are some of the stories we've put together since late October 2015:

Here’s a list of our top 10 visited stories since November:

Since November, we published three new special coverage pages: one on protests in Ethiopia, one summarizing our end-of-2015 coverage, and another on violence targeting secular bloggers in Bangladesh. Check them out:

For the last year and a half, we’ve been handing off the Weekly Writing Tips to different newsroom editors each month.

In November, Lauren Finch took a trip down memory lane to remind us of past tips on good writing practices, keeping your writing simple, and writing for a global audience.

Mary Aviles took over in December, explaining the importance of the who and curating some of the best writing advice she’s read throughout her career.

In January, Amira Al Hussaini innovated on the regular Weekly Writing Tips style, making them an interactive exercise for the entire community. We learned all the important steps that go into selecting photos and tweets and using Facebook as part of our reporting, and received two collaborative posts in the process: Ringing in 2016 with Global Voices Contributors and GVers Pick their Favourite Tweets In Tribute to David Bowie.

Ndesanjo Macha took over the tips during February and March. He taught us the art of writing and psychology, what common mistakes to avoid to speed up the editing process and how to become a regular GV author.

Our contributors were busy in the last few months receiving attention from other media outlets and bringing their expertise to conferences, panels and more.