Held for 30 Hours at JKIA+Kenyans on Twitter Outrage. #YellowFever #KOT 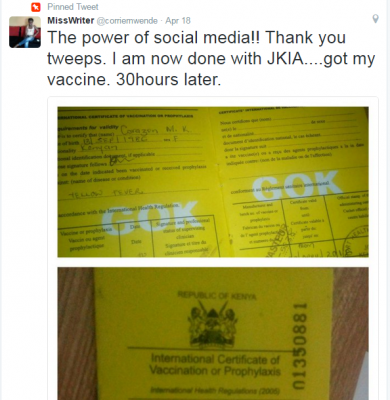 I left Nairobi on Wednesday 14th April, 2016 evening via MASH a popular long distance travel bus that crosses borders into different East African countries.
On reaching the border, nothing seemed amiss with my travel documents. I handed my passport and was easily let into the country. Because i had all the documents needed-or so i thought.

I stayed in Uganda, Kampala for 3 days and left on 17th April, Sunday morning via Rwanda Air. At Entebbe airport the flow was as it has always been in my previous travels.I crossed the immigration desk with my valid passport and was shown the waiting area as i waited to board my flight which was scheduled for 9:30 am.

I got to Jomo Kenyatta International Airport at around 10:30 am. On reaching the international arrival entrance, I found two ladies from Port Health checking everyone's travel documents.

When it got to my turn, I shared my Kenyan passport. That's when the lady inspecting asked me where my Yellow fever certificate was. I said I had none. She then took my passport and told me to stand aside. I did.

Once everyone was checked, there were a few of us with either no valid yellow fever certificate or no certificate at all.

We were kept for around 10-15 minutes as the ladies at Port Health department consulted each other regarding our situation.

I remember hearing a gentleman who had sat next to me in the flight being told that he had to go back to Kampala seeing that his injection had not lasted in the system for a while…which in this case should be 10 days.

Later one of the lady officers at Port Health called me and started explaining how crucial my lack of yellow fever certificate was;

Port Health Officer: ‘Why don't you have a certificate?’

Me: ‘Because i do not have the yellow fever vaccine’

Port Health Officer: ‘You need to understand that you can not travel without the certificate’

Me: ‘But no one stopped me at the border. How is it that it is crucial now? I have traveled to Uganda and Rwanda ‘before’ without one. At no point while paying for my road and flight ticket did i see a disclaimer on the importance of yellow fever certificate as a travelling document.

Port Health Officer:'JKIA is an international airport that's why we are keen here!’

Me: ‘Aren't those double standards?’

She later called an officer from Ministry of health inquiring on what to do with my situation. When she was done with the call, she turned to me and said, ‘Since you are from Uganda, we will need to take your blood sample for tests and later on allow you to have a vaccine’

‘How long does that take?‘ I asked

Her response was that it would take all night.

‘Is that what the law says?’ I continued to ask.

‘Yes. Ministry of Health requires you to have the tests taken. You are doing a great deal for your country’

That's when i agreed and stated that if that is what the law requires of me, then i will oblige. I could see the surprise on their faces. I don't know if i was to refuse to sleep there…or if I was to create some commotion so as to be let go…I don't know.

She then showed me a place to sleep, and mentioned that I was FREE to walk around but not beyond the Immigration desks.
In the midst of our conversations, i got so emotional and would cry…not because I was distraught by their decision, but by the fact that my tear glands have no exclusivity when it comes to shedding.

So Ports health officers advised that I would have to wait for a team from Kenya Medical Research Institute (KEMRI) to come test my blood. The time then was 11:30.

At around 4:30 pm, the lab guy from KEMRI arrived with some medical kit. Took my blood sample and stated that he needed to take it back to KEMRI since the organisation operates 24 hours a day.

Asking him how long it would take for the results to come back, he mentioned that by morning i would have my results. Great.

I was given dinner and some bedding for the night. 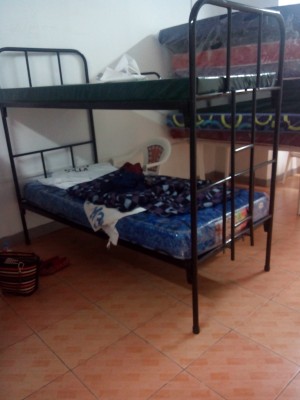 At 7:30 am I walked to the help desk at Port Health inquiring for my results. The lady mentioned that I should first wait for the boss to check in, which would be at 8 am.

At 8:30 am I went back and the same lady at the help desk tells me that i need to be patient. I inquired how long it would take and she said that there was no definite timeline-because it is beyond them. Sigh.

I went and sat on the benches at the International arrival desk, waiting for someone to at least communicate with me.

At around 10:30-10:45 am some ladies stride past the Kenya Airports Authority customer care desk and lament at how pissed off they were for being told that they had invalid yellow fever certificates-and would have to stay longer at the airport so as to have their blood tested.

They sat next to me and tell me that they have been told that I am under quarantine.

Quarantine? Yet i was roaming all over the place!

I had to go google the meaning of quarantine because that would mean me being in isolation with strict supervision. I mean I was being held at JKIA due to suspicions of yellow fever right?

‘Why wasn't this an option for me?’ I asked.

That's the moment I got so angry and decided to seek solutions via twitter. 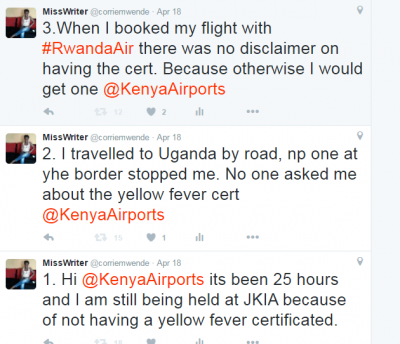 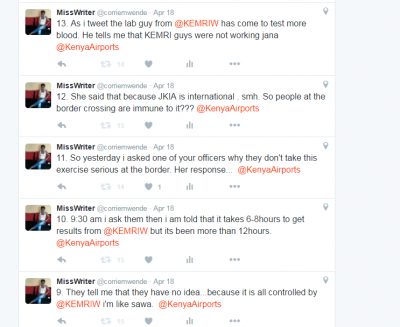 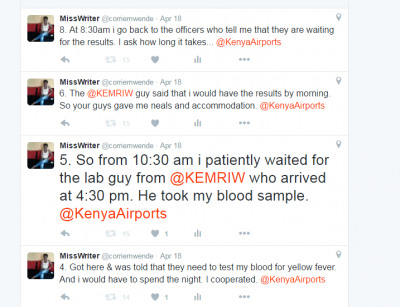 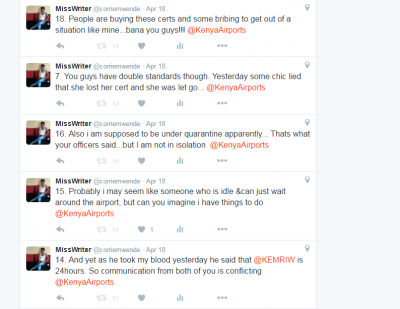 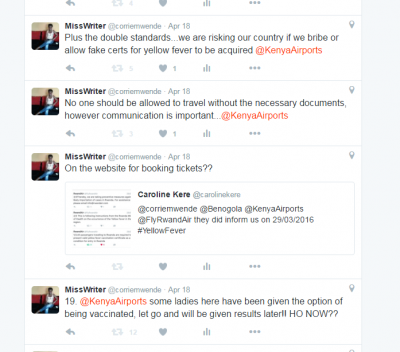 The series of tweets from my account and those of concerned Kenyans on twitter,triggered the Ministry of Health to respond and Kenya Airports Authority sent one of their own to find out what the problem was.

It was then than Ministry of Health got in touch with KEMRI and Port Health to understand how grave the situation was. 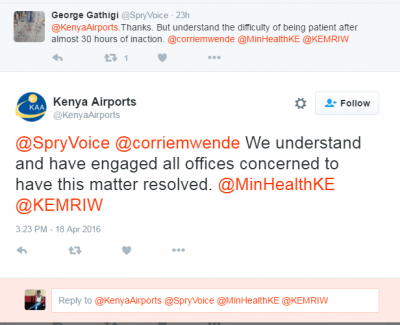 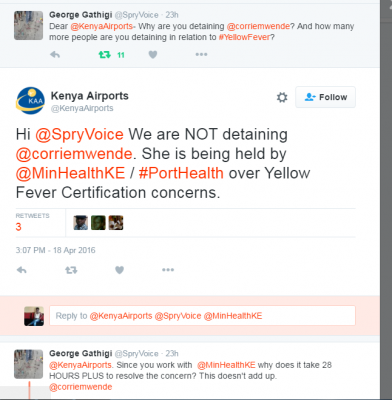 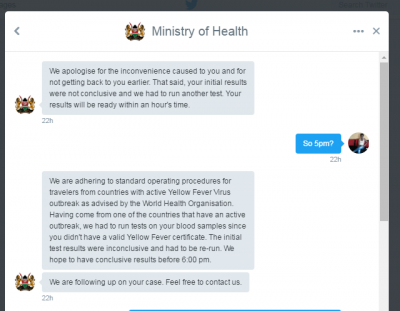 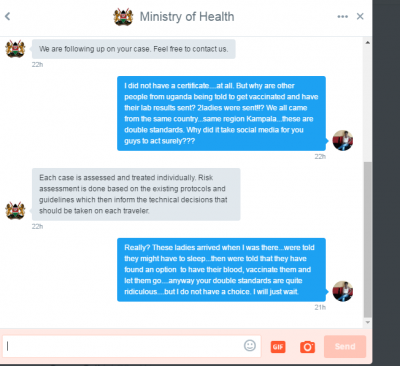 Pamela later mentioned to me that she had not been briefed about my case my the officer who was in charge on 17th April. She apologized stating that she was doing everything possible to ensure that i get my results fast and go home.

During all this time, KEMRI officers were hard to get in touch with. The Port Health officer who had handled my case on 17th April was also not easy to get hold of via phone.
Some reaction from Social Media and Mainstream media 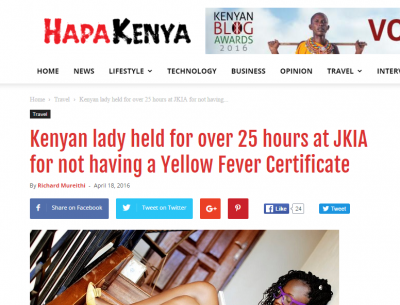 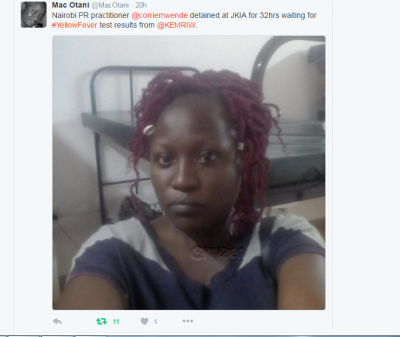 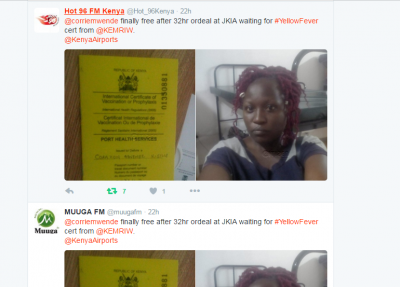 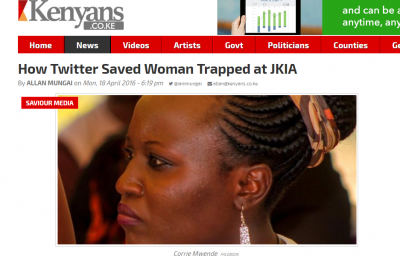 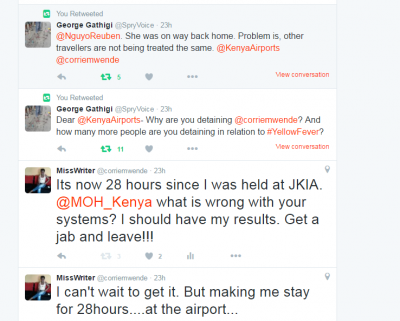 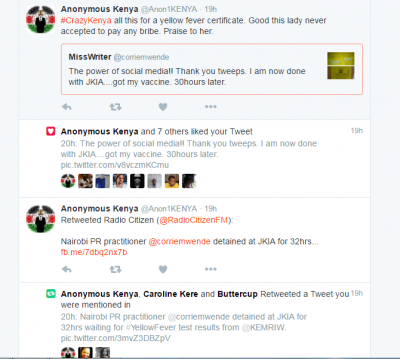 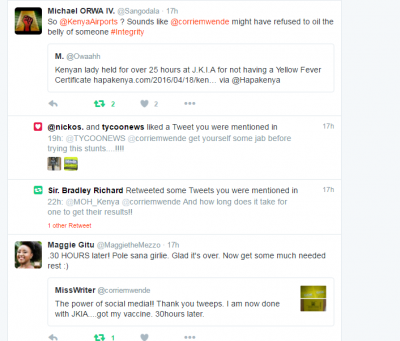 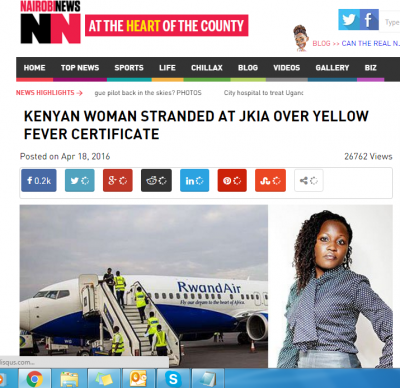 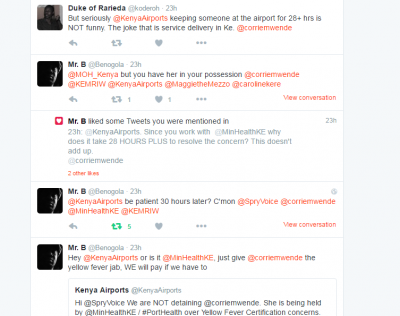 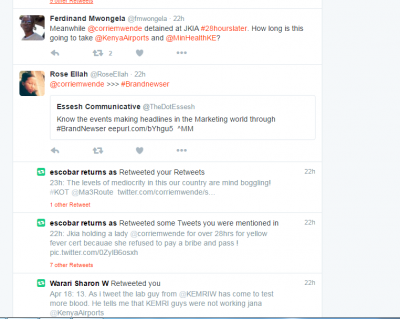 At around 5:30 pm the lab attendant from KEMRI who had taken my blood sample the previous day came to JKIA and told me that my results were negative. I asked for the lab results but was told that they would take a long time for them to get to the airport. So instead the best they would do is give me the information via word of mouth. To date i do NOT KNOW IF MY BLOOD WAS INDEED TESTED!

That is when Pamela, requested me to pay and take a yellow fever vaccine, I agreed.

In my many tweets i wrote to Ministry of Health that it would be best if i had a letter showing where i was and why I was being held at JKIA.

I left the airport at around 6 pm feeling drained, angry and at the same time relieved- Carrying a letter from Ministry of Health stating why they held me at the airport for over 24 hours-In my opinion, a very PR choreographed letter. 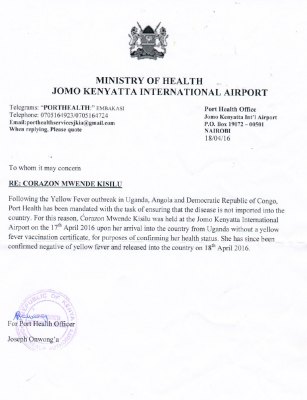 On 19th April, 2016, I received a call from one of the Ministry of Health departments apologizing for the ordeal which i went through and stating that it was wrong for it to be conducted the way that it was and that they would follow up on the matter.

The power of social media got me out of JKIA. Kenyans on twitter asked the right questions to the right organisations and this shows that indeed social media voices go a long way.

As it stands right now Kenya has been ranked fourth as the most tweeting African Nation-this is according to a Portlands Communication report.

Kenyans on Twitter and Mainstream media played a huge role in my release. Otherwise I would still be held at JKIA with no answers.

This did not just happen to me, but also to my good friend Eric1Key who together with my Kigali friends were not aware of the sudden measures by EAC. 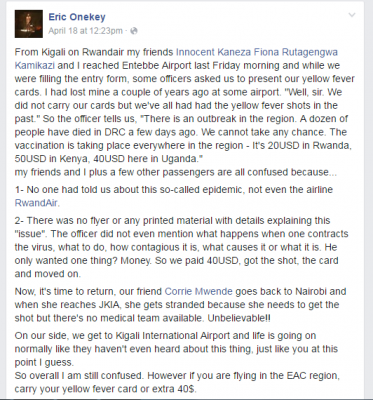 Be sure to carry a #YellowFever certificate. Not a fake one! Do not bribe! Just get a vaccination.