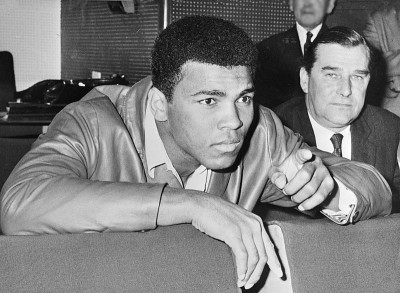 “Muhammad Ali is dead?” My husband Kamran looked up as the news came across his feed. “He was a hero to me. He was like a god.”

The generation of people touched by Mumammad Ali may not be on social media expressing their grief, but they are remembering him in living rooms, on radio and television, in conversations with friends.

His 1964 conversion to Islam and his refusal to fight in Viet Nam made him an international figure as much as his boxing did.

Muhammad Ali was a bridge figure. A global voice. It would be great for the Global Voices community to honor him as such.

For those too young to care, ask parents or grandparents or uncles or aunts. What do they remember about Muhammad Ali?

To get you started, here's a story from Kamran who was a baby when Muhammad Ali changed his name from Cassius Clay to Muhammad Ali.

“When Muhammad Ali became a Muslim in 1964, my father woke up everyone in the middle of the night to listen to him. But after that we didn't care what religion he was. We loved to watch him. It was so much fun to hear the Persian voice-over of Ali. We loved the way he talked. For us children, we couldn't really understand his words, but we could see his body language. Like when he was talking about why he became a Muslim or opposed the war, we didn't really get it. But we saw the way he stood, the way he presented himself. Like he was unbreakable. Like he was a hero. That's why he became our hero. Even though we weren't very religious, he became a kind of symbol of revolution.”