GV Meeting in Medellin, Colombia: Paisa Power for the world 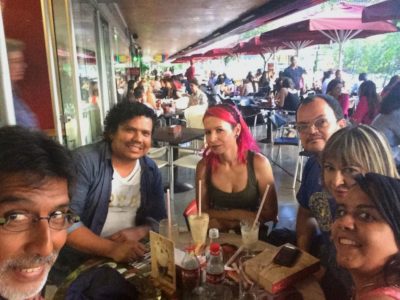 The Global Voices Translators community in Spanish has the most numerous staff of translators, which makes it not only the largest community in our organization, but also the most productive so far. Its members, just like the spanish language speakers, are spread out between the new and the old continents, live in different time zones, and some of them even live in places where spanish is not the official language.

This presents an almost insurmountable challenge when trying to make the crossover from virtual to reality in order to strengthen the ties among the members of the community. It would be impossible for all of us to get together. And it is difficult, even for a significantly small group of us, to meet in a particular place. The closest we’d ever came to accomplishing this is by summoning a minimum group of translators to the GV Summits, and it is obvious that the majority can't attend these events.

However, and recalling that old saying, “If the mountain will not come to Muhammad, then Muhammad must go to the mountain”, I make every effort to meet with GV Spanish Translators whenever I travel. Though, I usually don’t travel to the cities with the major concentration of translators (such as Buenos Aires, Barcelona, and Madrid), nevertheless, I keep trying.

My most recent trip led me to Medellin. In truth, I didn’t get my hopes up in regards of holding a meeting since the translators who reside in Medellin number no more than two or three. However, this time I was welcomed with a positive response, and one translator, Albany Rivera, confirmed that she was available to meet with other GV’rs. Trying to avoid a reunion of just two people, I invited Cati and Lully, local GV authors and with whom I can always count on, and also invited Gabriel and Henry, who were part of Hiperbarrio, the emblematic project of Rising Voices in Medellin.

So, on the evening of last Friday July 8 th, in a peaceful coffee shop located in the center of Medellin, I joined Cati to wait for our guests. To my joy, all of them appeared one by one, even Lady Dianne who was also part of Hiperbarrio, showed up and was greeted with open arms.

The chat or chats, were so animated that they stopped only when we realized that the café was getting ready to close for the day. We still prolonged the conversation a little bit longer while we walked together before heading to our respective destinations.

Since I don’t intend to share only my point of view of this little review of the meeting, I asked the attendees, making abuse of their time, to write a brief piece about it.

Henry accepted my request and wrote:

The reunion was really pleasant. We reminisced about anecdotes, finding catharsis from the processes we went through in Hiperbarrio, and the way the interests and needs of the Convergentes’ test community have evolved. It was very fulfilling to see Catalina Restrepo and Lully Posadas, for it has been a long time since the last time we saw them, and to meet Albany as well.

On the other hand, Cati wrote:

The mini GV meeting allowed us to corroborate that the community owes its existence throughout all of these years to the synergies that are woven beyond the virtual, and that each member of GV is a source of an ocean of ideas. Proof of this was the diverse subjects of conversation that ranged from family affairs, metadata, and maps, to IT security, among others. These local summits should take place with more regularity!

We definitely must try to make these translators’ mini reunions possible (Hello Mohammed!). In the meantime, I will keep you posted of when and where my travels take me next time.

*Paisa is the colloquial way to refer to people from Antioquia, the region where the city of Medellín is.

This post was kindly translated to english by Helen Siers.