I am Gwenaëlle, Gwen for short, from Europe. I am seeking the position of Volunteers’ Representative in this coming election. 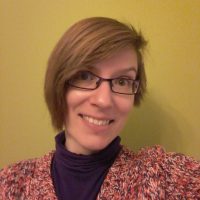 My background didn't really set me up for working with GV, but here I am! I studied physics in Paris, then had a 9-year career in academic research, until I felt I was ready for something else. I've now been working in the semiconductor industry for the past 4 years.

So… how did I arrive on GV in the first place? Pretty randomly, it turns out: I started out of my love for languages and cultures, and my need to keep my French fluent and accurate. You see, I left France 11 years ago, but my language is what expresses my identity the best and I don't want to lose it. I started translating for GV in French exactly 3 years ago and I've been more and more involved over time. Since last year I also help Suzanne Lehn and Claire Ulrich, our Translation Managers, with the sub-editing and publishing process.

Working with GV has opened new doors to me, both thanks to the community and the topics of the articles. What I do with you is making me a better world citizen as it has helped me getting involved in different projects. Through my line of work I try to convince girls that a technical or scientific career can be for them, not just for boys. I've spoken at several career events in the South East of England and mentored students and a schoolgirl through SEPnet and The Girls’ Network: the education I received should be as natural an option for girls, as it has been for me.

In addition, both Rising Voices and a family event made me realize how poorly the world treat minority language speakers. Now that I live in another country than mine, I fully understand how the lack of respect of one's language is a denial of a very personal part of their identity. I co-founded an organization to promote and publish material in one of these languages and I curate our Twitter account (@AcademieDuGallo). Some of you may have seen the memes we made for the Mother Language Meme Challenge co-organized by Rising Voices and to which our organization was a partner.

Among what I would like to work on if elected:

But these are only a couple of my ideas, and what truly matters is, as they say, the sum of us: our community is always boiling with ideas, topics, questions, and it's fantastic to witness. It's crucial that the volunteers know that they can share them and contribute in shaping GV's evolution. That's where the two Volunteers’ Representatives come in, and that is the voice I hope to become: yours.

I have learned and received a lot from everyone at Global Voices since the day I started working with you and I am thankful for everything, but now it is time for me to express my gratitude in a more constructive manner and give back to our community.

Start the conversation, ask me your questions here in the comments, by email or via Twitter.

Thank you for reading!
Gwen:
Email me at my contact form!
@DiffractedWord