Last year, Access Now, Meedan and Lingua launched an experiment. We asked, what would happen if the most important tweets from RightsCon 2016 were made available in Spanish and Arabic? Given the conference’s global audience, it felt crucial to make these social media posts accessible to people tuning in from different parts of the world.

How many people follow a hashtag conversation online who don’t speak English, or who might speak English but would prefer to speak their native tongues? Hashtags play a significant role for folks participating remotely (such as via live stream), enabling them to chat and communicate with those in attendance. Hashtags also build a community around conferences in a new way, extending in-person, physical connections to the digital realm.

Using Bridge, Meedan’s tool that enables people to translate digital content quickly and easily, translators from Global Voices and the Meedan community made translations available during RightsCon 2016. We translated 444 tweets — 172 to Arabic, 259 to Spanish, and 13 from Spanish to English. That’s 148 tweets per day, or (assuming an 8 hour day), roughly 19 tweets per hour. With this pilot, we learned that about a third of people who started following RightsCon during the conference did so via the translated accounts

We also learned something new: translation isn’t just for people following along. It’s also a great project for translators themselves. Whenever we do these live translation projects, the translators tell us they appreciate how it helps them participate more deeply, and help share the conference message in their communities. With a values-oriented, global community like RightsCon, that means an opportunity to help grow the conversation around human rights and technology. 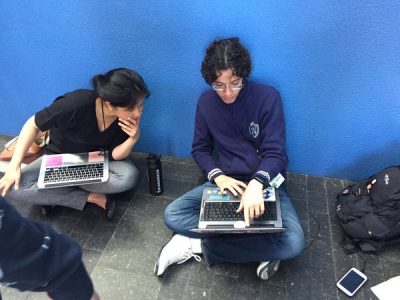 During the Translation Lab at RightsCon 2016, Meedan engineer Caio Almeida talks with RightsCon attendee (and helpful Twitter representative!) Connie Chung as they try to troubleshoot a technical snag early in the project.

How it will work at RightsCon Brussels

We’re back at RightsCon this year, and we’re supporting more languages. In addition to Arabic and Spanish, we are now translating social media into French as well, to make content accessible to French-speaking Belgians, since RightsCon takes place this year in Brussels. Global Voices Lingua translators will be joining from around the world to contribute to making translations, and the Meedan team will be on hand to make sure they’re able to use our tools effectively.

Bridge comes in two forms: a robust iOS app in beta and a pre-beta Chrome extension that’s designed to work with tools like Tweetdeck and Twitter.com. Translators hop online and start following hashtags. They’ll often divvy it up based on personal interest and relevance to their communities.

These translations are then posted online with the original Tweet and a screenshot of the translation, like so:

We’re keen to translate social media in a timely fashion, but we learned last year that quality translations of quality material are much more important than getting something out as it breaks. Some of the translations were completed within 5 minutes of the tweet being published, but others were finished later. The priority for this year, as it was for last year, is identifying the best and most resonant tweets.

Ready to go? You can follow us here, and please do spread the word!