Hi GV Community, we're launching a small new feature on the GV sites and I wanted to send out a warning because the feature will be sending you email and we don't want anyone getting surprised.

The feature is called Achievements. Like in video games, the achievements system keeps track of your accomplishements and adds achievement “tags” on your user account to keep track of them.

When you “unlock” an achievement you'll get an email congratulating you and linking you to the list of other users who have that achievement. 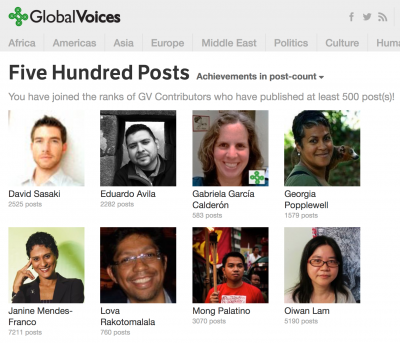 User listing for the 500 posts achievement!

Achievements function similar to categories added to your user account, so the listing page is like a category page that lists posts, but with a list of users who have that achievement instead.

For the time being we're considering this feature as a “beta” and it will only be shown internally for the most part. We won't be showing achievements on your public profiles and there won't be any links to the user listing screens visible to the public.

In the future we might add actual “badge” art for each achievement and display them on your profiles, but so far most of the important data the achievements reflect (number of posts and how long you've been posting) are already displayed on user profiles.

The achievements we've set up so far (more to come)

The point of achievements is to recognize how hard you've worked on GV sites over the years. We're perpetually amazed at the dedication and energy you have for our mission and work, the achievements system will make sure we notice the important milestones as they happen!

That's it for now. Once the system is enabled and you start recieving emails, please let me know if you spot anything fishy or broken!

May 18, 2022
END_OF_DOCUMENT_TOKEN_TO_BE_REPLACED
Cancel this reply