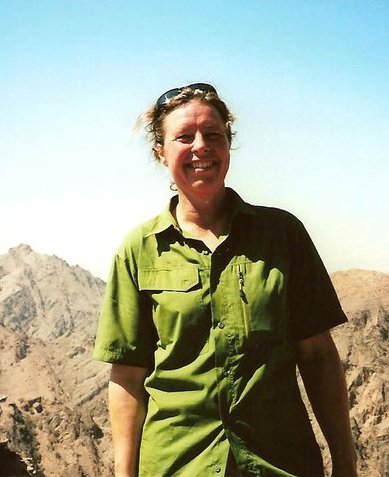 Global Voices: Tell us a bit about yourself and how you joined GV.

Mieke Tulp: Name: Mieke
Age: eh, well, I am in my 50s (early 50s!)
Country of residence: the Netherlands
Occupation: translator
Role within GV: Translation Manager
I like: reading, visiting museums, spending too much time on the computer, horseriding, running, cycling, travelling

GV: Please tell us about the stages of your involvement within Global Voices.

MT: I was asked by fellow-translator Percy to help translate articles for GV Lingua Dutch. We are talking 2009, she had just set up GV Lingua Dutch and was looking for volunteer translators to get it up and running. Several years later I joined her as an editor. Now she takes care of the technical IT stuff and I manage the rest (screening volunteers, editing their translations if needed, managing the Google Group and what have you).

MT: Translating for GV does have an impact, of course. I have always felt a solidarity with people who struggle and/or have less than me. Translating for GV made me look further, made me aware of struggles I had not known of before. It also made me realize there are many people who are trying to make a difference.

GV: Did the social media scene change a lot in your region since, say, 2009?

MT: It has become part of everyday life in the past few years.

MT: I have been a professional translator for over 10 years, so translating and editing for GV is an addition to what I already do on a daily basis.

MT: If people in the Netherlands and Belgium read our posts I would hope it makes them appreciate the country they live in, that it makes them realize there are many other countries and regions in the world where life is more of a struggle.

GV: What are your dreams?

MT: I have no big dreams for myself, I have pretty much everything I need and want (yes, I know, lucky me!) For others I would hope their own dreams come true.

MT: An e-mail exchange with a refugee who lives in an asylum centre in the Netherlands. I also liked meeting several GV board members and translators in Amsterdam (2009, I think).

MT: Lingua Dutch remains relatively small. There is not a lot of traffic on the site, which is also because many Dutch people are comfortable enough with English to read the English articles on GV. We have several translators who deliver once or twice a month. Most of them are professional translators or language students. A little growth would be good, but if we can continue this way, it is fine.

MT: It opens doors to other countries, interests, people.

MT: I usually pick posts that I am personally interested in (environment, children, creative solutions) and when something important is going on I will of course select a post about that. I contribute to GV because I can. It is something I can do, even though it is probably just a drop in the ocean when seen in the greater scheme of things.

MT: Just do it. You help spread the word about things that will otherwise not be known or seen.

MT: I live in a rural part of the Netherlands, even though it is not far away from some major cities. When I look out of the window I can see my neighbour’s cows. In the hamlet where I live people know each other and they help each other out (and they gossip a lot :)). Our country is flat, green, full of cows and the occasional windmill and people who like to speak their minds. Right-wing political parties have been gaining followers, and I think that is worrisome.

MT: Describe myself?! I am an impatient know-it-all, but I cover my imperfections with good stories and laughter.
I see the world as a place where a lot is wrong, but it is full of good people who want to make a difference.

Thank you very much, Mieke, for this great interview!