The author on a tour in Cebu, Philippines, during 2015 Global Voices summit. Image used with permission.

The world might remember November 10, 2007 as the day when a then king uttered a then president the phrase “Why don't you shut up?“

But that date has a completely different meaning to me. It was the day I came across Global Voices.

It was a moment of professional uncertainty to me. I've been, and still am, a practicing lawyer who back then had started to wonder what else was out there for me to do. I like being a lawyer, but after years of practicing law, I felt the urge of trying new things.

That Saturday, while reading the paper, my mom pointed out a note about Lingua project. I read it fascinated with the possibilites that came up with it. The last line said something like: “if you are interested to volunteer as a translator, feel free to apply”.

So, I applied. Later that day, I got an answer from then Lingua Spanish editor, Juan Arellano, who asked me if I had some free time to engage in volunteering, if I had a regular Internet connection and if I had some idea about blogs. The answer for the first two questions was a definite yes; about the third one, I was eager to learn. So he assigned me my first translation, which I delivered the next day. And it was published almost right away. 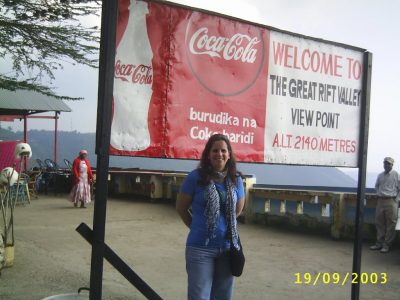 The author at Great Rift Valley in Kenya, during 2012 Global Voices summit in Nairobi. Image used with permission.

Two years later, then regional editor Eddie Avila invited me to write as an author for Global Voices. I agreed immediately, with some doubts though, and so came my first post as an author.

Here in Global Voices, I've been volunteer translator, volunteer author, and I still have both roles. I currently am Lingua Spanish editor. Between all that, I was acting regional editor for some months in 2014 and also helped with Amazonia project for Rising Voices, that gave me the possibility of working again with Eddie Avila.

Global Voices isn't only a huge family to me. It has a deeper importance. When I was a little girl, I used to sit down with my brother, who made endless lists of countries, with their capitals and main facts. Those names, that were only part of those lists, became real once I entered Global Voices. So, to me it's now incredible to meet people from those countries I used to read about when I was still in elementary school. It's also a tribute to the teachings from my older late brother. He'd be fascinated with that, I'm pretty sure.

Global Voices also gave me the opportunity to travel to unimaginable places, such as Nairobi, Cebu and now Colombo.

And exactly a decade later, what else can I ask for?

It's been, indeed, ten years of a beatiful friendship… and counting. The painful fall back from wonderland