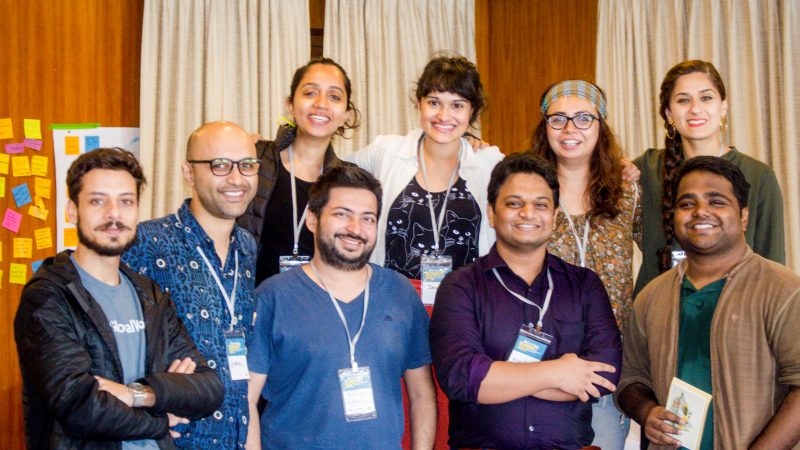 Part of the GV South Asia team at the Sri Lanka Summit. Image by author.

During 2018, Global Voices newsroom editors, section leaders, and other core team members will be experimenting with a new approach to our work: periodically setting detailed goals and keeping track of our progress on the Community Blog. In the following post, South Asia editor Rezwan presents his plans for the first part of the year.

In recent years, our South Asia authors have often expressed interest in seeing Global Voices publish stories that cover a topic across two or three countries. Sporadically, we have organized one or two such stories, but that did not have as much impact or generate as much enthusiasm among other team members as we would have liked.

Yet the interest in collaborative stories remains. Most recently, this was expressed at the South Asia Tent that we organized during the Global Voices Summit in Colombo.

As the regional editor for South Asia, I want to address this interest among my team, which would also benefit Global Voices’ readers as it will produce diverse stories focusing on the region.

So for the next three months, I want to lead the South Asia authors team to collaboratively produce three to four stories per month that look at topics from a regional perspective. Some suggestions include:

Why is this important?

This will promote understanding and friendship across borders. I think organizing it as a goal, especially after the summit, can generate enthusiasm and build strong team spirit among the authors.

Also, this will give our coverage of the region a welcome mix of positive cultural posts. Often we end up doing current event stories that encompass disaster and turmoil, but the other sides of lives in these countries need to be highlighted too.

The benefits of collaborative writing

Col·lab·o·ra·tion: The action of working with someone to produce or create something.

Collaborative writing lightens the load on everybody involved. Instead of shouldering the responsibility of the entire story, you can focus on crafting specific parts that play to your greatest strengths, whether that's writing the headline or conclusion, digging up research, or finding photos. If you are stuck somewhere or get writer's block, your co-authors are there to give you inspiration or reassurances.

Through the exercises of discussing the topic together, writing and re-writing, it can also strengthen certain skills, such as diplomacy and teamwork. And if the collaboration is successful, we are able to share with the world the unique knowledge and perspective of multiple authors across countries — brought together in one story.

Over the next three months, we hope to see at least five to six South Asian team members from a variety of countries participate in this effort, and to publish about one cross-border collaborative post per week.

We have already added a Google Doc listing the suggested topics. Depending on interest, contributors are free to write, organize, suggest story topics, or all three. Each topic will be assigned a leader to organize the story production process, beginning in February.

By April 15, when we we have several stories published, we will create a special coverage page that curates all of the entries. We will also keep track of how readers react to the stories we publish.

And by the end of April, I hope to help a couple of our participating authors write blog posts on the Community Blog reflecting on the collaboration.