A Suicide Mentality, on the Precipice of War in Northeast Asia 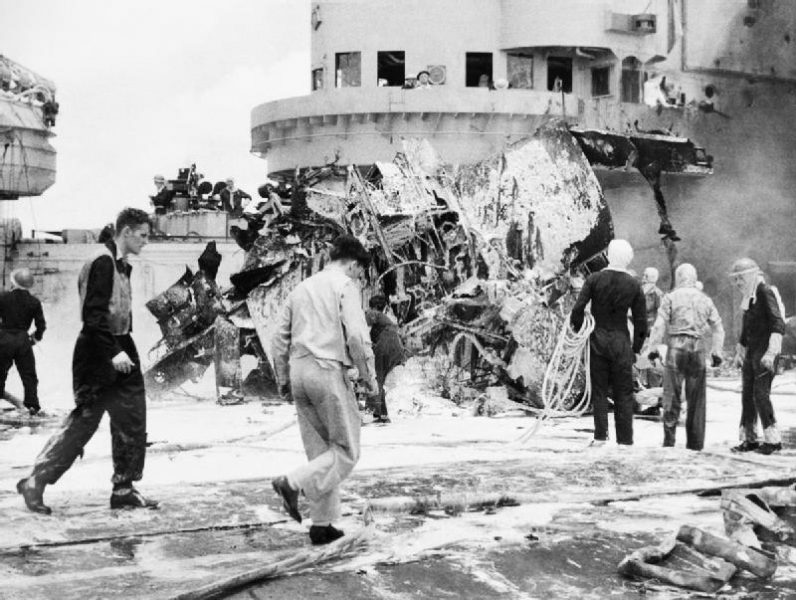 “The remains of a Japanese Kamikaze aircraft that crashed on board HMS Formidable off the Sakishima Islands, May 1945.” Image from Wikimedia Commons, Imperial War Museum. This work created by the United Kingdom Government is in the public domain.

There’s a debate intensifying among political analysts on whether North Korea is heading down a suicidal course by continuing to develop nuclear weapons.

On the surface, North Korea and its supreme leader Kim Jong Un seems to be succeeding in its calculated risk of defying UN sanctions and circumventing the oil embargo. In January, Russian president Vladimir Putin declared “Mr. Kim Jong Un has obviously won this round. He has missiles of global reach, up to 13,000 km, which can reach almost any point of the globe.” The Russian authorities seem to believe that this “shrewd and mature” leader will succeed in facing down his “imperialist enemies” by manufacturing intercontinental ballistic missiles that can threaten every major city and military base of the US and its allies.

But these experts are overlooking the self-destructive impulse that underlies North Korean bravado. The question arises as to whether Kim’s regime would be willing to risk annihilation when options for negotiations exist, at least in theory.

Anyone who has studied the North Korean power structure knows that Kim Jong Un himself is being pressured by generals preoccupied with the humiliation of the Korean War. In fact, their views on suicidal attacks in some ways resemble the propaganda that the Japanese military disseminated during WWII. A North Korean defector recently revealed that the military has assembled a brigade of suicide bombers who are ready to attack the enemy with armed “nuclear backpacks” if the situation becomes desperate.

As much as North Korea and Japan despise each other, there are striking parallels in their attitudes toward suicide. Prior to and throughout the war years, all Japanese “subjects” were ideologically primed to sacrifice their lives for the Emperor. Similarly, North Korean “subjects” today are obliged to display fanatical devotion to the Kim dynasty by fighting to the last person. In both nations, the propaganda ministries were— and continue to be—successful in indoctrinating the masses to believe in their national exceptionalism relative to their decadent neighbors.

In Japan, ritual suicide has long been popularized in films about bushido and kamikaze pilots, but the voices of those who were ready to commit suicide, but who through unexpected circumstances survived the war, have often been suppressed. In a culture that fears shame above all else, the line between coercion and a freely chosen death often gets obfuscated. Even the 47 rōnin immortalized in the masterwork Chūshinguraand numerous other films can be seen as victims of the cynical practice ritual suicide known as seppuku or harakiri.

Narratives about the social pressure that was brought to bear on the warrior class to terminate their lives to “preserve honor”, reveal the uncanny resemblance between seppuku and public execution. Conservative Japanese politicians such as Shintaro Ishihara continue to extol the virtue of young soldiers who sacrifice themselves in novels and films, but the truth of the matter is that it was not unknown for kamikaze pilots to be drugged, bolted into their cockpits and given only enough fuel to reach enemy targets.

Despite the scarcity of North Korean statistics on this subject, Japan and South Korea have the highest rates of suicide today in the developed world. As it is well known that both Japanese and Korean societies are rigid and hierarchical, and offer few second chances to minorities or those who have fallen through the cracks. Unless one agrees to follow prescribed conventions and ritualized codes of subservience, one can easily be ostracized or punished.

While any individual death may merit sympathy, the legacy of ritualized suicide is particularly problematic. Korean attitudes towards death and suicide were shaped by three decades of Japanese occupation shaped. As North Korean defectors have reported, there is a possibility that Kim Jong Un’s special forces might employ kamikaze tactics if they see that their country cannot withstand attacks by the American Air Force and Navy.

Suicide often signals an inability to seek creative solutions to seemingly impossible dilemmas. Rather than reviving futile geopolitical struggles that should have ended in the 20th century, political leaders should be focusing addressing more urgent priorities, such as the mass extinction that is now being engendered by the environmental crisis.