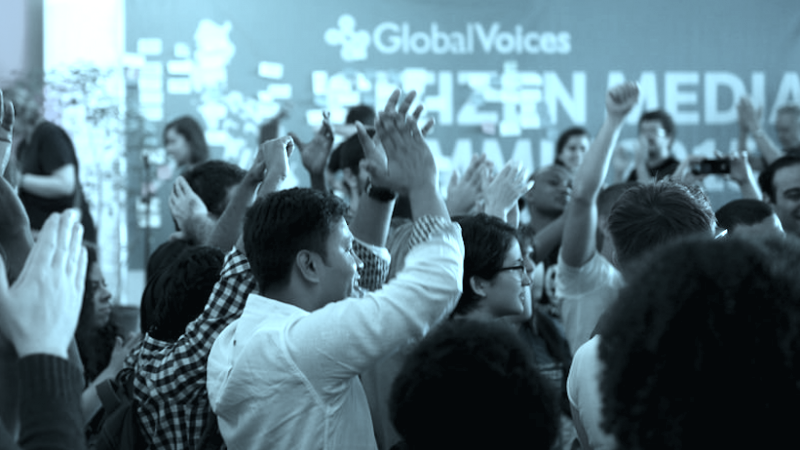 I’ve been a proud GVer for 10 years. During that time, I decided to make my thesis with GV as the main field of work, something that took a lot of interviewing and observation, and that given this moment in time, brings ideas that feel right to share with you all.

At the end of the observation journey, I got to present what we were, what we do, what we want and how we struggle in front of a group of old school researchers inside the cold aged walls of French academia. My goal was to show how much we could learn from this community of people, how the way it functions gives us very important clues about discovering ourselves through other cultures, and how using the internet savyly could help us make important connections.

The painful risk of remaining tight in the bud

That long work of observation showed that being able to change is crucial not only for survival but also for blooming. Here’s what I learned about what we are and what we do, and what can guide us in these moments of changes:

We have had a somewhat hard time to find our place inside the big noisy space that is the current international news space. Some of us want to run after the news, some of us want to explain things, some of us want to be active campaigners. We’ve repeated a lot that we tell stories from citizen media, we have serious questions about what citizen media is, and we’ve had long conversations of what a GV story is and how it’s built. All of this in while seeing a lot of mainstream media spaces, the ones that seem to be having the upper hand right now in the online universe, using citizen/social/new/online conversations.

But in such a world, we’re far from being the typical journalists, the typical bloggers, or even the typical media organization. We learn and unlearn from our connections inside and outside the community, we’re flexible, we collaborate, we explore technologies; and all of this without being restricted by age, and often times, by languge. Together with that, we mix text, video, sound and image. Some of our stories are fed by ideas coming from Youtube videos, or even Youtube comments combined with SoundCloud audio documentaries. There’s even been GV posts that have come from email exchanges!

We hunt for stories, and we make them happen collecting and putting together sources and ideas that wouldn’t have found each other had it not been a skillful media reader that woulnd’t have differences of format get in the way of a good story. Yes, blogospheres have become messy and in many cases, irrelevant. But that’s because the media space has exploded and sources of information have gone through an seemingly never-ending metamorphosis. While for many blogs have become less of a desirable source of information, community and independent media has bloomed.

In the case of Latin America the death of the blog frenzy has become the birth of a million ways of doing independent media, of small communities connecting to the world and stating that they exist, that they have a lot to say, and that they deserve to be heard by those beyond their borders.

This is something I tend to repeat often when people approach telling me they want to be part of GV. And so… Are we reporters? No. Do we write origial content? Sometimes. Do we break news? We have… But should we? What do we do then? From what I’ve seen, what we do best is giving a human perspective on things that are going on.

As I see it, we connect dots. We put light on people and things that show us that we’re capable of understanding, and that make us realize that solidariry and counterpower exist and grow upon the realization that they’re not alone.

As cheesy as it may sound, a new world not only is possible, it’s on its way.

We’ve had a lot of discussions regarding our narrative, our readers, the different globalities that go through us, the domination of the English language and the Western/American tones and perspective. These are conversations that need to keep taking place, as difficult and complicated as they are given our origins and our ways of communicating. But in any case, I think it’s vital that we remember what makes us relevant, which, I personally think, is not necessarily running behind the news cycle.

What does make us relevant is the constant sharing of stories that read between the lines of conflicts, that see what came before and what could come after, that put us in connection to people with similar values and ideas, and that tries to bring out the reality and the message of many that feel they’re shouting in the dark

All of the above is made possible by people coming from many walks of life. We’ve been guided by journalists, but we’re constantly fed by researchers, activists, risk takers, technologists, and media readers in an ever-moving, ever-changing learning space. No wonder Global Voices has been the center of many works of research, and the first step in a lot of professional paths.

The cultures present inside this community are a visible combination of many identities reflecting many realities and complexities that are necessary to be able to read the world we’ve lived in for centuries, a world whose colors we’ve come to pinpont only recently.

So, it’s not only about the stories in the site. It’s the conversations we follow -even the exasperating ones-. We campaign, we talk to each other, we build friendships. We make contact with the authors we translate and with the bloggers and journalists we quote. We have a space in which we can collect expressions coming from people living in many ways the deep versatility of the world.

We are proof that borders, nation states and identities are very powerful, but they’re also a complicated product of our imaginations.

The question now is… how? To me, all the things that keep us tight together are very clear, and are still beating.

Keeping them in mind seems to me a fantastic compass to carry as we all rise our giant collective foot to make a step forward.

These lines and these ideas come as the result of my research work and my experience here, but more importantly, they come after the many interactions and learning experiences I had with the amazing duo made by Sahar and Lauren these last years.

To both of them my thanks and the very best in the new endevours in which they will work their magic.