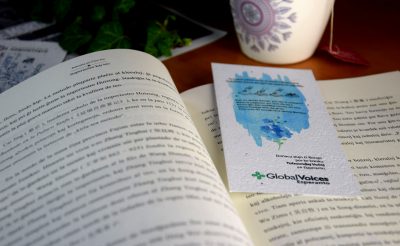 Global Voices Esperanto is proud to have been part of the Global Voices family since 2013. As the only Lingua section based on a constructed international language, Esperanto Lingua presents both the uniqueness and the challenges of a worldwide community of contributors and readers. We are glad to promote local and global dialogues, all the more in a year celebrating linguistic and cultural diversity.

Our work, however, has yet to grow completely sustainable. How can we, toward this end, spread the word about Global Voices Esperanto?

Esperanto Lingua translators Manuela Burghelea and Herman Dekeŭnink responded to this question by planning the production of seeded bookmarks, i.e. plantable bookmarks containing seeds, as a way of thanking existing contributors, of advertising about the website, and of attracting new contributors. Clément Baleyte, a volunteer for the Rotterdam-based Esperanto youth organization TEJO (Tutmonda Esperantista Junulara Organizo), designed the bookmarks, which are intended to reflect Global Voices’ longstanding commitment to indigenous languages. The seeded paper was then printed by a local Dutch company, containing seeds of the “forget-me-not” flower (Myosotis) to make sure every linguistic voice and legacy is kept alive.

The seed-paper bookmarks were given to the participants of two major Esperanto events of the year: the World Esperanto Congress (Lahti, Finnland, 20-27 July) and the Esperanto Youth Congress (Liptovský Hrádok, Slovakia, 28 July-4 August), both of which hosted presentations about Global Voices’ work with indigenous languages. Sneak previews of language activists’ discourses were provided, based on Esperanto translations. An interview about Global Voices was published in the congress gazette, and a further interview was recorded for an Esperanto podcast. 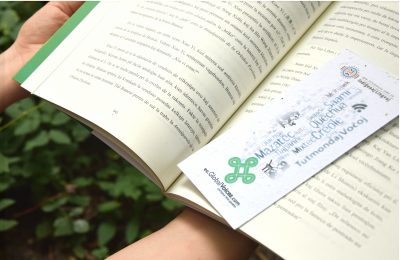 In the current Year of Indigenous Languages, Global Voices is an official partner in spreading the voices of indigenous-language activists. Esperanto Lingua has been one of the most active sections in this campaign, translating interviews with different leaders of the Twitter campaigns @ActLenguas, @DigiAfricanLang, @NativeLangsTech and @AsiaLangsOnline. See all related articles translated in Esperanto at Global Voices Esperanto, topic “Indiĝenoj”.