Thiyazen ALalawi [1] a Yemeni artist discusses the political and social issues taking place in Yemen through his drawings in the streets, several months ago, he was chosen to participate in a pro-peace round for Yemen. In Switzerland, France, Belgium, and Britain. However, the Sana'a airport closure [2] in Yemen due to the conflict in Yemen [3] caused him to go to another airport.
His journey began on Thursday, August 22, 2019, from Sana'a to Sewon in Yemen.

The journey lasted more than 18 hours passing through checkpoints of the parties of the war [4] as well as the bad road.

He arrived in Amman, Jordan on August 24, 2019, and began his story with embassies.

“We Yemenis have a visa to go to war and free tickets to go to hell, but it's impossible to get a visa to enter Britain or another European country.
In the last six years, I could join any partie in the war or go anywhere, but my choice remains so far that I must stay in my country and continue to resist war with art; continue to paint in the streets and spread the principle of peace and coexistence with all.” 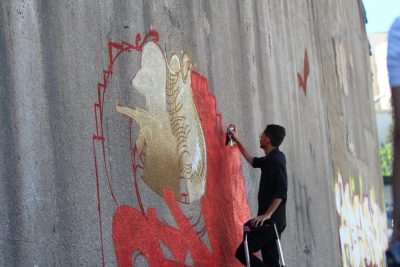 The British Embassy has twice in a row refused the visa request for Thiyazen, and the Swiss Embassy has done the same.

“Their only rejection is that they want me to have a financial guarantee that I'm going back to Yemen. How do I convince them that I am an artist and this art It can't be priced, It's my most precious thing I have, and nothing I can't offer them as a guarantee!
I'm not complaining about this personal experience, the invitation is has been dead to me to participate in round not for myself, but for the experience I have had and to be a voice for the youth who participated in the streets with their art.

It is a shame that Yemen is thrown to the edge of the world and this Yemeni passport is totally rejected, not for something, but because this passport has a single visa which is going to war.”

At the end of his story, which he posted on his Facebook [5], Thiyazen says: