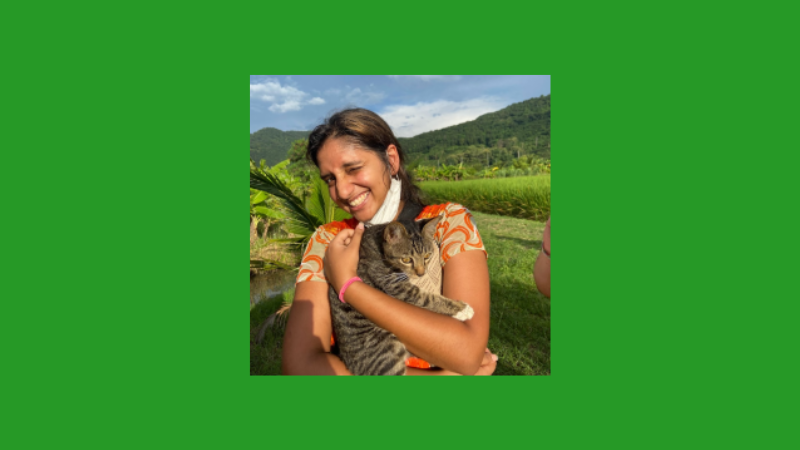 Global Voices welcomed our first Green Intern from June–August 2022. Anokha Venugopal is from New York City and is currently a senior studying environmental studies at Oberlin College in Ohio, USA. She is passionate about journalism, photography, and sustainability. This summer, she assisted in Global Voices’ Rising Voices and Green Voices programs by producing articles, editing interviews, attending Green Voices meetings, and more. Read our interview to find out about her summer and Global Voices’ internship experience. This interview has been edited for length and clarity.

Sydney Allen (SA): Anokha can you tell us where you're from, a little bit about Oberlin, and your role this summer?

Anokha Venugopal (AV): I'm from Jackson Heights, New York city. [It’s a place that] I think it also embodies a lot of GV's mission — it's one of the most diverse neighborhoods in the country.

And for GV, I was an intern this summer and I worked a lot with the Green Voices and Rising Voices team to publish interviews and sort of try to encapsulate what different interviewees’ goals were with language access and especially digitizing language access. I also worked on some articles for Global Voices. I got to interview my family this summer and learn more about how farming practices are affecting traditional farming methods in south India. And I also got to talk to the Co-director of the Endangered Language Alliance who is another person within the United States working to make language access more easily available and to document all of the different languages that are being spoken across New York City.

SA: And so, can you tell us a bit more about what fields you're interested in? Is it journalism? Is it environmentalism? Language?

AV: My ideal pathway is something that merges visual media and environmentalism because I'm really passionate about photography and videography. And I think that visualization is often the most easy tool for difficult issues and also the most accessible across a wide range of backgrounds. So yeah, I've been interested in photography for many years, and in recent years I've used it for journalism, and also just to document the places that I've been to. So like in Thailand, I was able to create a photo book of all the places that I went to. And it also, I think, serves as a very important tool for memory on a personal basis — almost like an homage to the people that you meet and the communities that you meet to have some sort of visual documentation of it, especially if there isn't already existing documentation of it.

But at Oberlin, I'm interested in environmental studies and specifically how environmentalism can be used both on a small scale and in small communities. Because I think one thing that I'm realizing the more and more is that even though climate activism and climate change is obviously on a global scale — I mean, it's affecting everybody — it's also incredibly important to look at it on an individual basis, how it's affecting individual communities and then what that means for how your response should be tailored to them versus having an umbrella approach.

SA: Absolutely. So can you share a little about the work you did this summer? You mentioned you published some articles with Rising Voices and Green Voices. What were those about?

AV: The most recent interview that I published for Rising Voices was with Alhassan Alidu. And he's based out of Burkina Faso, but was born in Ghana. And he is working to make the more language more accessible online. In his interview, Alhassan mentioned how it's spoken a lot offline, but online, it doesn't have much of a presence. And I'd say, it sounds like he's one of the primary people who are really pushing for it to come online.

And so seeing how in all legacies of colonization, Western languages often like sort of dominate a place, but how that often serves as like a competitor and it can overwhelm efforts for regional languages. So I think what Alhassan is doing is just utilizing every social media platform, he had a YouTube and Instagram, a Facebook page, a Wikipedia page, just taking tools that originally were based in Western media and then using them as a platform to level out access. And I thought that was really, really cool.

SA: Yeah, that was an excellent interview! Is there anything, in particular, you learned from that?

AV: Mhmm, just how sort of monumental digital tools can be. I definitely get caught up sometimes in how much we're consuming, and it's also difficult sometimes not to get jaded with everything that's going on in the world. But then you also see how much online access — especially for minority languages or just places — that don't get historically enough media coverage, how this can make something erupt into public consciousness. And that sort of made me look at why, why internet is important.

SA: So the last three months you were participating in the GV internship. What are some of your biggest takeaways from this time?

AV: The first one to start with because it's constantly being repeated is intersectionality. And the more that word was mentioned, the more I sort of understood that intersectionality exists at the intersection of everything. You could take like a social issue, say Rezwan’s article about rising salt water in Bangladesh and how women are taking birth control to avoid unhygienic menstruation practices due to a lack of fresh water. And so, on one hand, like it's an environmental issue because of your access to water is a massive issue globally, and then it's also a feminist, and it's also a health issue. And also, then it becomes a reproductive issue, because it's also access to you know birth control or pills in general. And so all those things exist coincide to create this article, which I think was really important to see.

Another takeaway is what access people have to media or to information in general. Just how much intention goes into having the maximum amount of people able to consume important information and global information at GV. And I liked one lesson in the first monthly meeting where we did exercises on headline writing. And I think in some spaces where people already have a lot of access to media, there's certain things that are like considered inherent information, you know, like you could just name drop and assume everyone would know it. And so, in that workshop, something that was repeated was to make sure you have a headline that like wouldn't exclude people if they didn't understand the context. So, making sure that anybody can read it no matter where they're from or how much access they have to something and really sort of providing a foundation of knowledge before getting into a complex issue.

And then, the final idea is access to community and platforms. I think access is something that's really important because in all Global Voices articles and Rising Voices articles, [we] always make sure to provide a voice to somebody who's actually embedded in the community rather than somebody who might just you know, be a large spokesperson or a figurehead. And I think in the field of work that I want to go into, getting voices straight from the source is the most reliable method often. Rather than having someone speak on someone else's behalf. And I feel like every single person that works for GV is also very immersed in their own community. And so they have an understanding when they are writing an article, how they should be talking to people and who they should be talking to. Especially with Indigenous communities and making sure that they're having a very strong voice in these articles.

SA: Thanks for chatting Anokha — we are going to miss you! It was great to have you this summer.

AV: Thanks! I'm very grateful for this internship and for all the people that I got to meet. I think also my favorite part was like teachats [weekly editors’ meetings]. And the music club chats too, because even then, I was like, “oh this will be a nice way to also just unwind and talk to people,” but then you get into more profound conversations. And I think GV is always finding ways to sort of cross borders, I guess and it’s a really, really great thing.