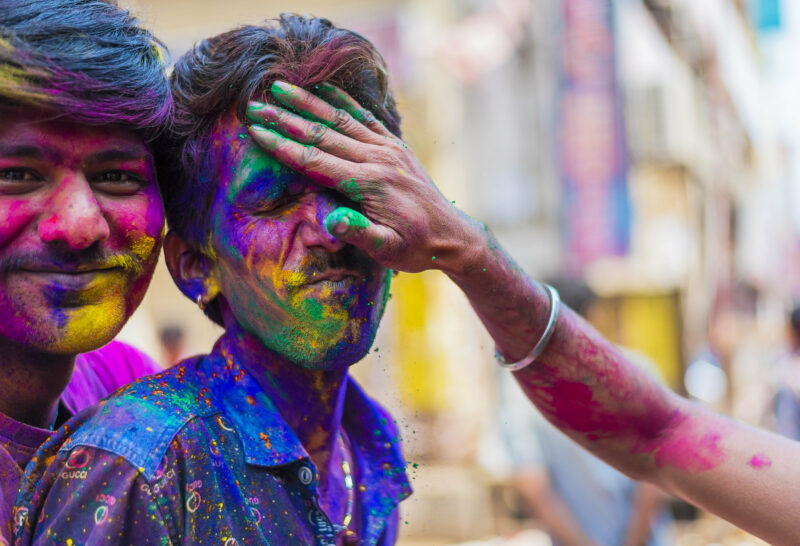 A man's face is smeared with coloured powder during the Hindu spring festival of Holi in Chennai, India in 2015. Observed in mid-March (Gregorian calendar), Holi originated on the Indian Subcontinent but is observed in South Asian diaspora communities throughout the world. Photo by Well-Bred Kannan (WBK Photography) (CC BY-NC-ND 2.0)

Thank you, GVers, for all your contributions in March 2022! Here are some of the month's highlights:

Staff changes: Stepping down from their GV staff roles in March were Tanya Lokot, who relinquished to Central Europe Editor position to focus on Advox research; Greater Central Asia editor Paolo Sorbello; and our Project and Development Manager Alex Esenler, who has joined OpenArchive as their Director of Programs and Operations. Replacing Alex as Civic Media Observatory lead is Giovana Fleck.

In March we also welcomed Sindhuri Nandhakumar in the role of research manager for Advox and coordinating editor on the Civic Media Observatory; and Zhar Zardykhan, who replaces Paolo as Greater Central Asia Editor.

Welcome to the following contributors who published their first GV story or translation in March 2022:

The Global Voices Podcast made a grand return on March 18! Helmed by the indomitable Ameya Nagarajan, the first two episodes looked at Russia's invasion of Ukraine as viewed from the global south, and the British royals’ ill-fated tour of the Caribbean, the crisis in Sri Lanka, and the pandemic's impact on Latinas with disabilities.

Media and conference appearances and other achievements by GVers:

Advox director Nanjala Nyabola was one of 12 “eminent persons” named in March to the United Nations newly established high-level advisory board on effective multilateralism. The board will be co-chaired by former president of Liberia, Ellen Johson Sirleaf and former prime minister of Sweden, Stefan Löfven.

February 22: Southeast Asia editor Mong Palatino participated in a discussion on the internet and freedom of expression with Picture People.

March 27: Younguang Mro, a writer and researcher from Bangladesh's Mro community whose pioneering Mro language grammar book was the subject of a GV story, was interviewed on Australia's ABC radio. Our South Asia editor Rezwan appeared on the broadcast as interpreter.

March 31-April 3: A Q&A with Global Voices in Italiano translation manager Marisa Petricca about her experiences managing and participating in a GV translation community was the basis of a research paper presented by University of Bologna student Marina Manfredi at the Atisa X Conference hosted by the University of California, Santa Barbara.

Number of translations and original stories published on Lingua sites in March 2022: 490 (up from 434 in February)

Top 10 posts by pageviews in March 2022 (includes only recent posts):

Top 15 countries from which people visited GV sites in March 2022: