The Many Hats of Gabriela García Calderón 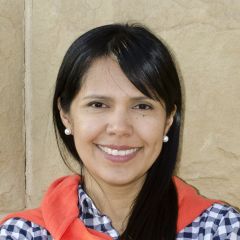 You probably recognize Gabriela García Calderón as one of the most prolific authors and translators in Global Voices ( More than 7.160 posts GV in Spanish and more than 415 en GV in English), and recently as the interim Latin America Editor, but I am going to tell you a couple of things about her that you probably didn't know.

A Peruvian attorney who enjoys eating lomo saltado and tacacho con cecina, two typical delicacies from her country, joined GV in 2007, when she saw and ad in the newspaper looking for volunteer translators. Later, she became an author. Besides writing and translating posts, she also contributes to Eddie Avila's project, Rising Voices Amazonia. It's only fair then to ask what she likes most about GV?

“I like to read stories of daily life of common people around the world, those that make us human no matter where we live, that we worry, like and dislike the same things. I like to feel being part of such a diverse community, so big and yet at the same time so close.

Overall, “I would like to propose that we are all one in this global village and the clue is to see unity in the differences”.

Among the many posts she has written, Gabriela says she would love to tell the story of a family that reunites after many years of separation, or perhaps one about the dog who ran two kilometers after the ambulance that carried its master.

“Maybe I am idealist, but this is the type of story I like to tell”, said the attorney who assures she has became more emphatic since working in GV.

It is no coincidence that her favorite author is James Michener, whose books narrate the stories of great moment in human history, but from the point of view of the ordinary people who experienced it.