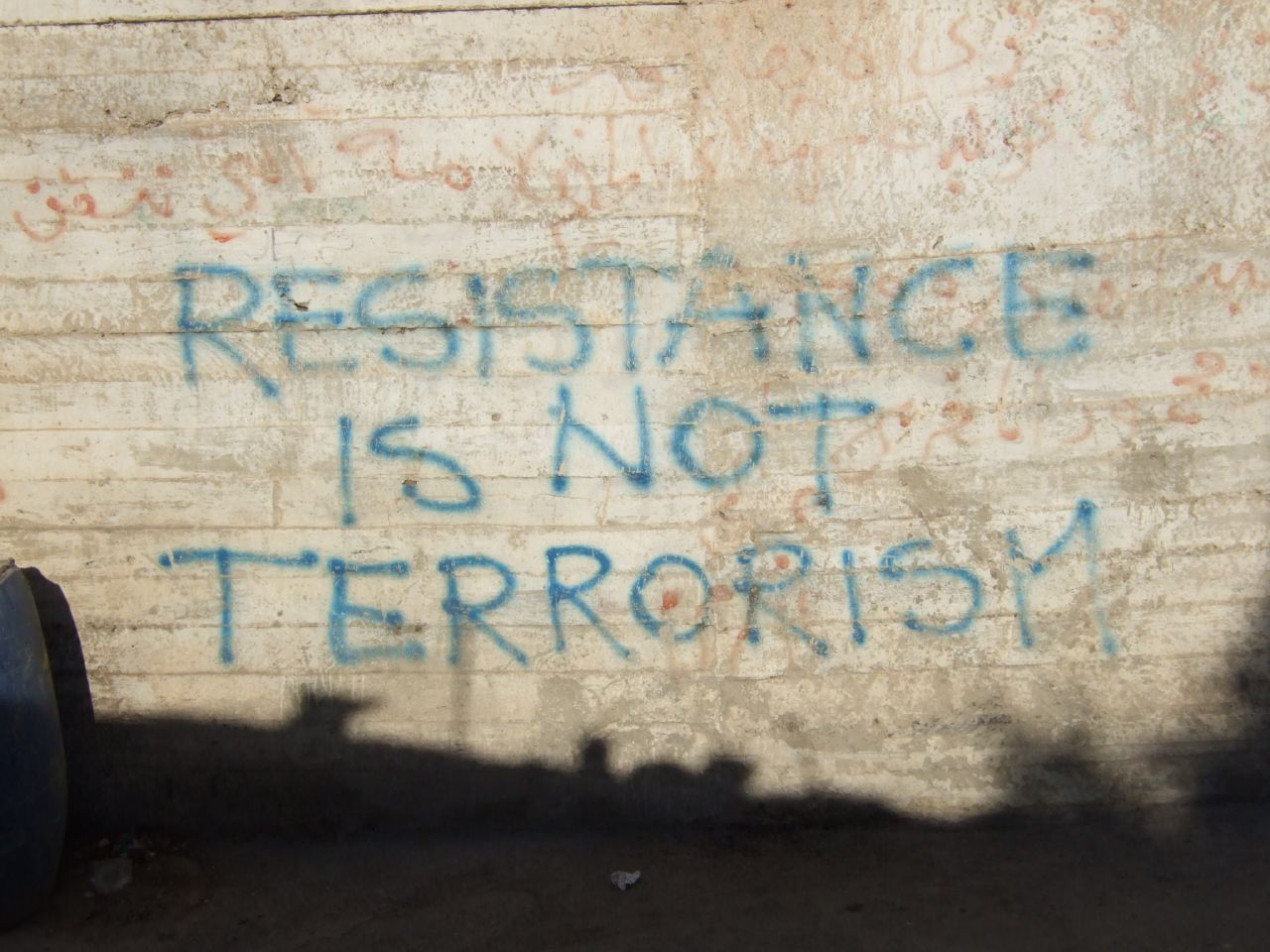 By Flickr user delayed gratification. Photo taken on November 25, 2006. From the walls of Deheisheh Refugee Camp in Bethlehem. CC BY-NC-SA 2.0

How do you feel about the terms terrorist, terrorism and terror?

Names and labels are something we take very seriously at Global Voices. From our editorial code: “Be aware of the labels you attach to individuals, people and groups. Question terms, names, photos or practices used in other media and by governments — only use labels that are in line with our code and values”.

During a Newsroom Editors chat in July (we have one every 6-8 weeks), we talked about the terms terror, terrorism and terrorist. The discussion prompted us to make some decisions:

We have informally been avoiding the terms terror, terrorism and terrorist the past few months (unless they are used in a quote) because:

After a long discussion with our editors we agreed to make it our formal editorial policy to avoid using terrorism, terrorist and terror.

Mary Aviles, our Latin America editor, mentioned that other media outlets, like the BBC, Guardian and Reuters, don't use the words unless part of a quote because of the political connotations that they carry, which could skew the story. Mary said “descriptions of actions are more powerful than adjectives” and many editors agreed with her.

Tanya Lokot, our Runet Echo editor, said that the same politicization happens in the situation between Russia and Ukraine. Descriptions work best to avoid using the label.

Rezwan, our South Asia editor, added that the word Islamist has become misused to become a synonym of terrorist.

Laura Vidal, our Latin America community manager, reminded us that words have different meanings throughout the world, so we should be mindful of that.<

Mong Palatino, our South East Asia editor, cited Myanmar, where the word rebel is controversial in that  context, so to get around that they've used the proper name of the group in question.

Brazil editor Taisa Sganzerla said we also need to be careful simply calling groups what they want to be called because it could skew the perception just as much as the government's label.

I talked about how we report ISIS. We are careful to avoid calling them the Islamic State and simply call them ISIS and describe who they are and what they do.

What's in a Name Series

The conversation also prompted the idea from Mary Aviles, Tanya Lokot, Laura Vidal and Ellery Biddle that we should produce a collaborative series on controversial names and labels within our regions and suggest a GV style for describing the individual, group or people.

If you have an idea for the series please send your editor an email or just upload the story here on the community blog!