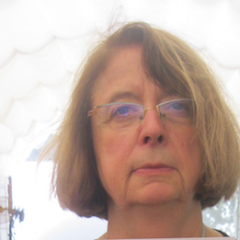 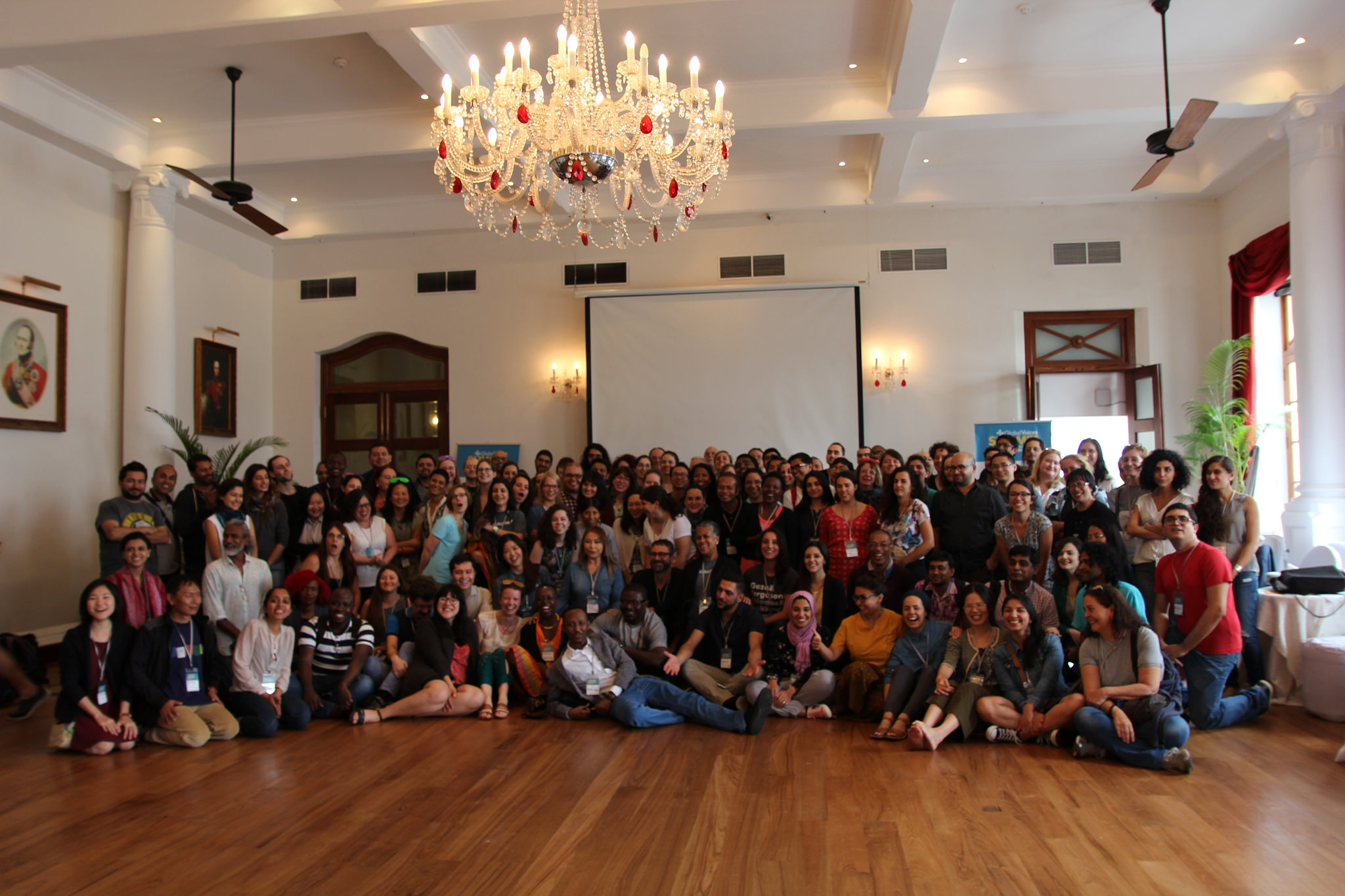 GV French team came to the Colombo GV Summit in numbers: no less than eight people, including veterans and discoverers; editors, translators and authors – often cumulative functions. You might even have seen a few more of us, had we not be still grieving for two of the best of us. Due homages were rendered to Anna and Boukary during both internal and public meetings.

To go on playing collectively, we decided, still before cooling off from the ebullient Summit days, to extend the atmosphere with a collaborative posting to the Summit blog, sharing everyone's favorite picture with a condensed comment.

This is indeed about emotion, and about magic as our Sri Lankan partner and host from Groundviews put it in his own poetic way. It is also about innovation – do you remember those people, including me, wearing funny colorful frames without lenses? – and a sense of privilege to be part of such a talented and generous community. 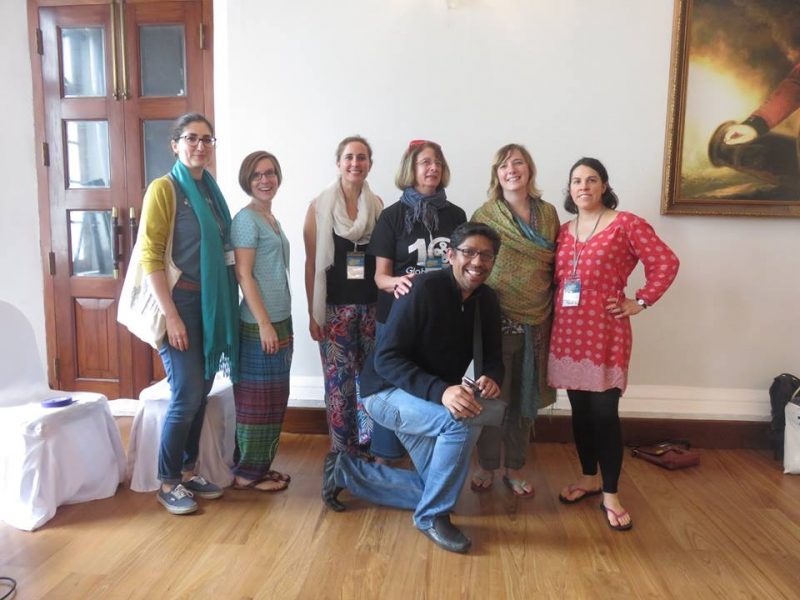 For me, the GV summit is an opportunity to be reminded of why we are contributing to this project: to concretize a few values: empathy, dialogue and justice. 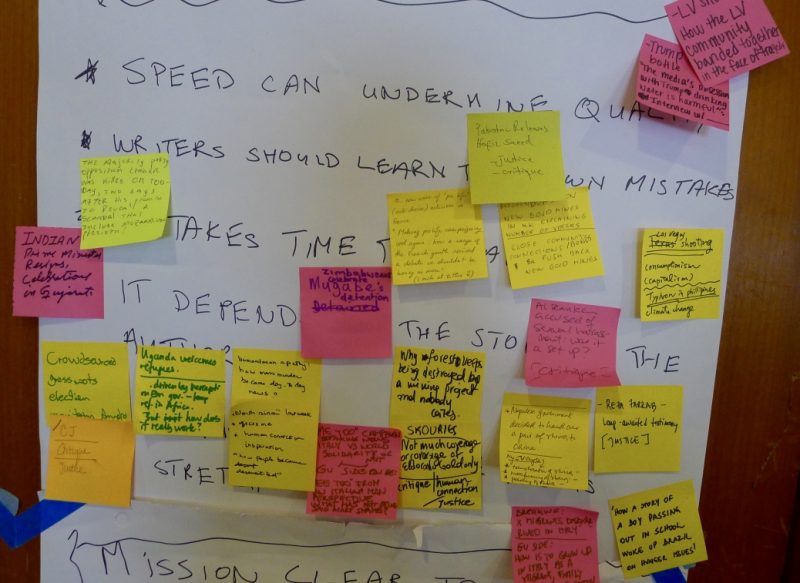 I'll only share this post-it notes snapshot from the’ Newsroom 101′ workshop led by Sahar. I had registered there driven by curiosity and the desire to write for GV in the future, and went out telling myself that, yes, I could write for GV, and not in the long run, right now! This was the overall pattern of this Summit for me, the very first one I attended. I arrived impressed, introverted, doubting my legitimacy to be there, and I got out… still impressed, introverted, doubting my legitimacy (!) but much less (YAYY success!). I feel like I have started work on myself, at the professional, personal and relational levels. What a therapy, GV!

As for my doubt about what I offer to GV in compensation for what I receive, I feel like I am taking the place of a young person who might offer more than me. I even talked to some friends about my intention to stop participating. Some people just laughed while telling me to show them where it was written that GV was only for young people and that the difference between my age and the average of the participants’ ages was also one of the values of GV: all different, all equal and committed to the same ideals. 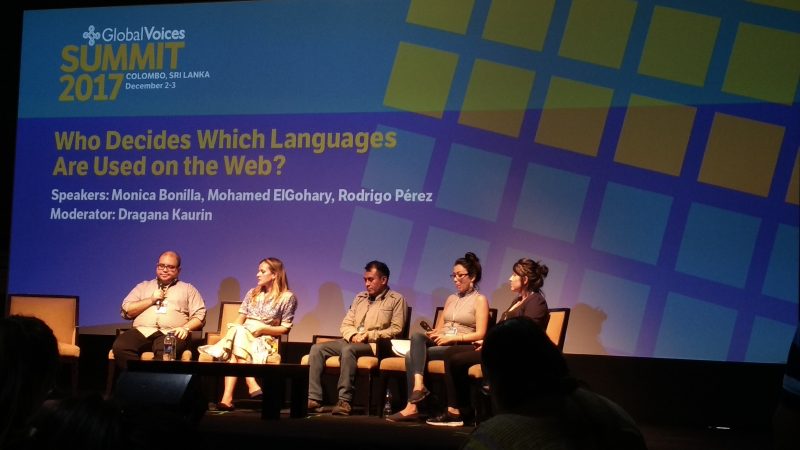 “Who Decides Which Languages Are Used on the Web?” Panel at the Public GV Summit 2017. Photo courtesy of Gwenaëlle Lefeuvre.

1) The pleasant feeling of meeting lots of people for the second time, after a first meeting via email. We know them and we don't know them at the same time, and of course, it's even more interesting in real life!
2) It is fascinating to be involved in a project that tries to counter the appropriation of the web by large monolingual companies, and even more so at a time when its scale drives it to redefine itself – hence my choice of picture.

I did not take any photo because I knew several people would take care of that and share on Flickr giving us access.
The Summit is a space for dreaming together. On a personal level, it is an opportunity to talk to people whose backgrounds, experiences and opinions make us grow, question ourselves and reflect.

Marie, author and project coordinator for CrossCheck, a project Global Voices is partner in, 2nd Summit : 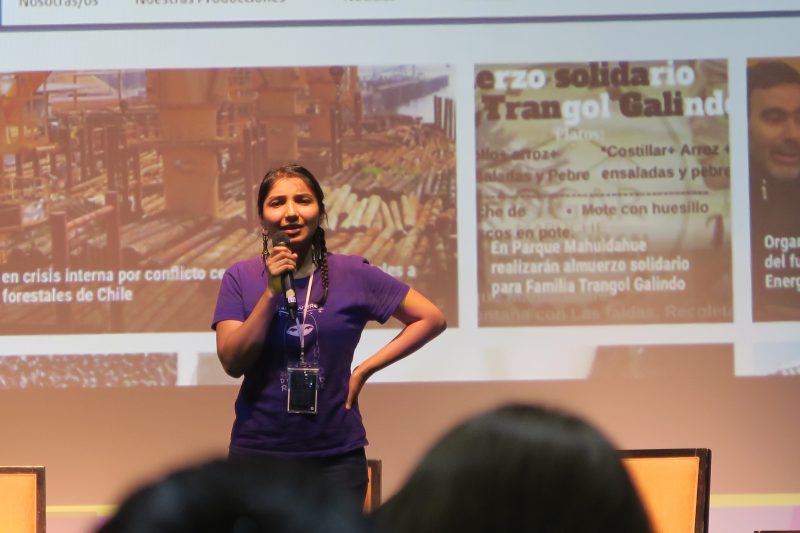 Simona speaks about the Mapuche language during the GV Summit. Photo courtesy of Marie Bohner

At times, there is a feeling of “too much” in a Global Voices Summit – too many people, too many hours of sessions, too many languages – it's as exhilarating as it is overflowing. However, when you manage to focus on what each and everyone shares, the nuggets reveal themselves, brilliant and strong, full of humanity. Like Simona Mayo during her presentation at the GV public Summit around the Mapuche language. Then you understand what makes GV unique, inspiring and special. And how fortunate you are to contribute to it. 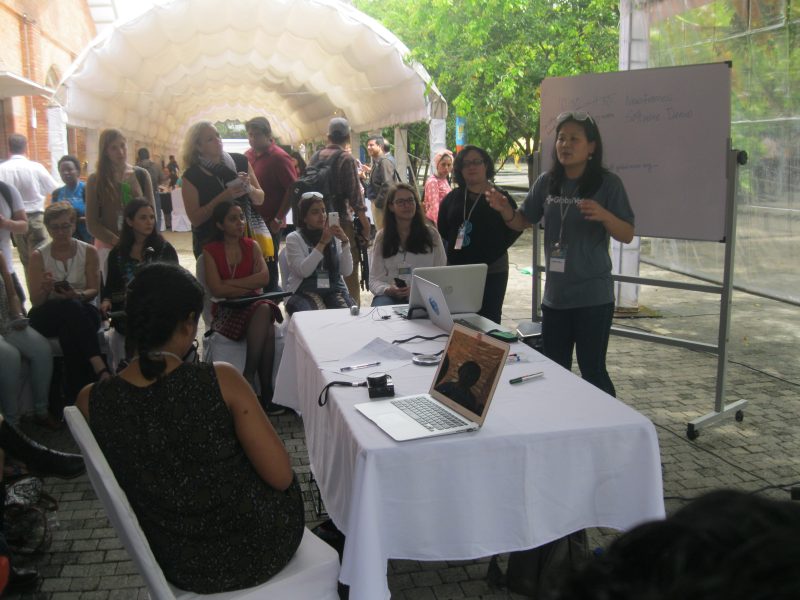 Well, my turn to contribute! As new official Editor and another veteran Summiteer, my chosen picture hails Connie Moon Sehat, the wonderful Director of GV's NewsFrames Project, who enticed me, me along with GV Russian's Editor Anna Shetnikova, into her innovative team to be the project's ‘ambassadors’. Our aim: to spread the word, and help training new ‘collaborative media analysts’ inside the GV community to write and translate exciting posts (one example here).

And let's give the final words to Abdoulaye – who by the way deserves a big thank you for his nonstop translating and authoring throughout the Summit, keeping the GV-FR web page alive despite the lead team being off-platform:

#GVSummits are not just opportunities to get together and discuss internal matters. They also provide a unique opportunity to discover new cultures.

He shares with us a choice of pictures he took in Colombo during his stay: 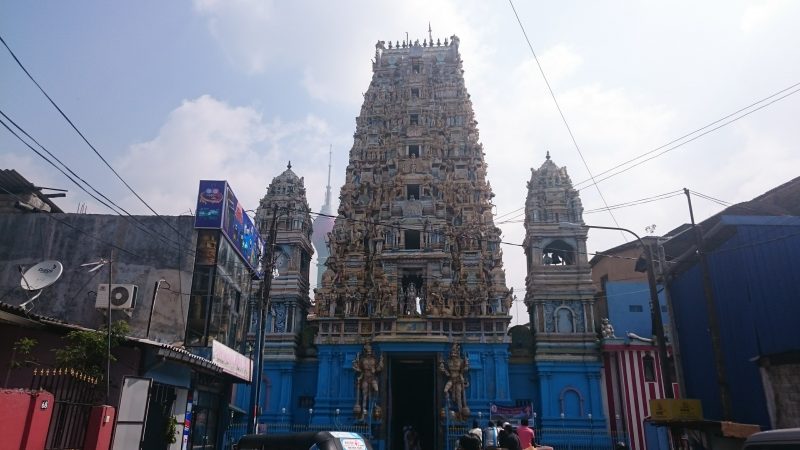 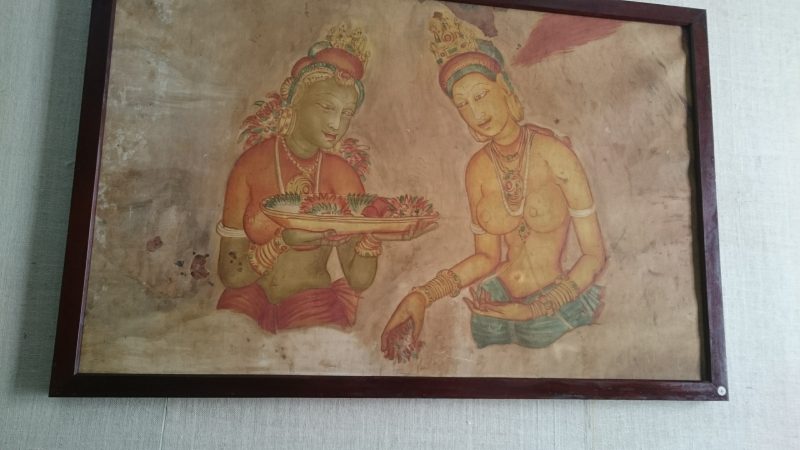 This masterpiece seen at the National Museum in Colombo was created in the 5th century BC, i. e. 20 centuries before Michelangelo was born. Photo courtesy of Abdoulaye Bah. 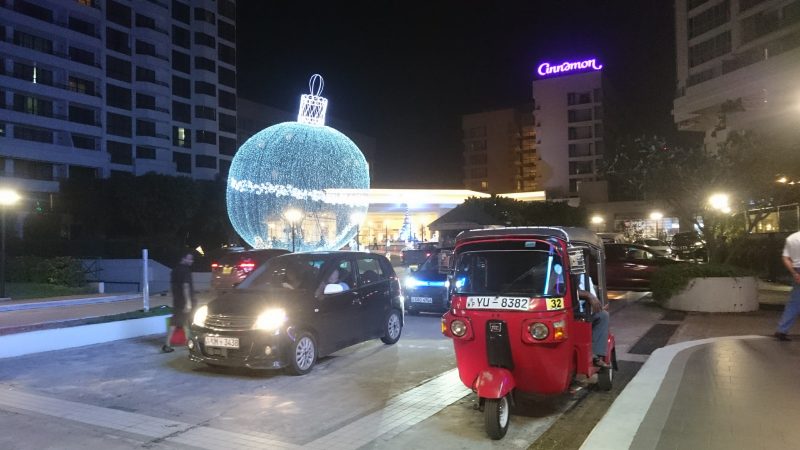 In anticipation of Christmas, making way for consumerism. Photo courtesy of Abdoulaye Bah 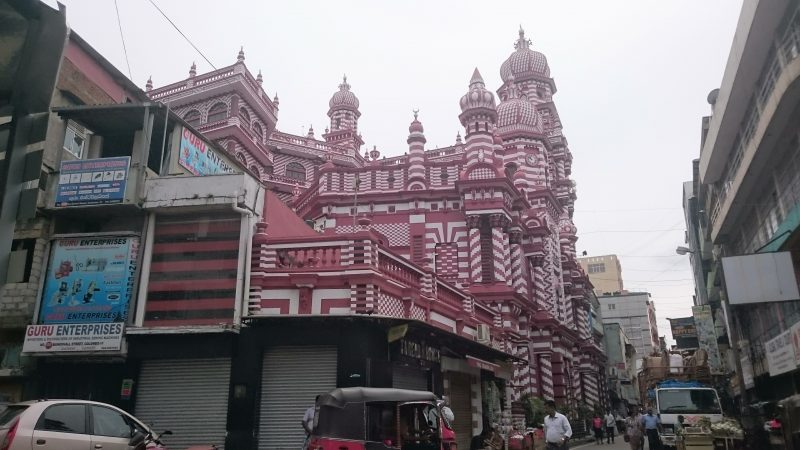 Jami Ul-Alfar Mosque, a place of Muslim worship open to everyone. Photo courtesy of Abdoulaye Bah