Editorial Goal 2018: We Want to Organize Writing Workshops for the Spanish-Speaking Regional Community 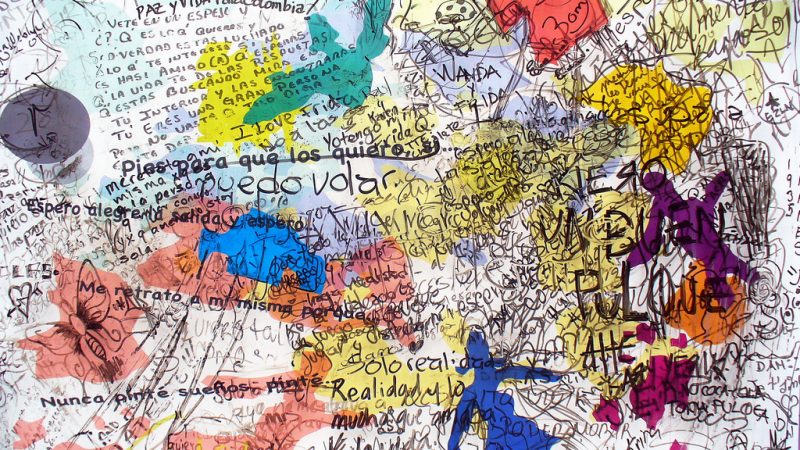 “Why would I want feet if I have wings to fly?”. This image, shared by Rubi Joselin Ibarra on Flickr (CC BY-NC-ND 2.0) shows part of an artistic exhibition devoted to Frida Kahlo that invited visitors to complete the words that had been written on the canvas and came from famous phrases and writings from Frida herself. The result is this beautiful collage of ideas that seem to me the beginning of many others. I believe it illustrates our processes and our ways of thinking together pretty nicely. -Thanks a lot for suggesting it, Lauren!-

During 2018, Global Voices newsroom editors, section leaders and other core team members will be experimenting with a new approach to our work: periodically setting detailed goals and keeping track of our progress on the Community Blog. In the following post, Latin America and Spanish language regional editor Laura Vidal presents her plans for the first part of the year.

Confusion over what a “GV story” is has been a long-standing issue. In the Latin American and Spanish-speaking regional community, there is a tendency to copy the coverage priorities and style of regional mainstream media, instead of being guided by GV's own mission and style.

There is also the challenge of contributors believing that writing for GV has become “too complicated” or that GV only wants long texts, or not knowing what story topics would be appropriate to cover or how to storytell for a “global” audience. This can lead to contributors shying away from writing in the first place.

Currently, to explain what a GV story is and dispel with the notion that writing for GV must be complicated, I conduct one-on-one trainings with community members. But this isn't the most efficient time investment.

We did organize a “mini-summit” a couple of years ago that addressed these topics for the wider regional community in various Google Hangouts, but the level of participation was somewhat low, and the resulting conversations were interesting, but way too long to be watched afterwards as just a YouTube video.

A way to clarify GV's mission and give back to authors

So for the next three months, I want to focus on creating tools and training initiatives that explain for my existing team and for new authors what a GV story is and how to write one.

Many of our authors are interested in improving their writing skills, and some of them — particularly the most recent ones — are enthusiastic, but struggle with the idea of a GV story or our editorial mission.

I will undertake some of these trainings with Kultural, an independent media outlet based in Paraguay and a publication partner of GV. I asked Kurtural for assistance since their values, stories and style is very much connected to our own. At the same time, Kurtural does very well with our readers and our community members.

Also, Kurtural was born from a workshop given by a group of editors and designers that resulted in learning materials explaining how to “make local stories universal”. I would also like to create materials close to what Kurtural put together, with examples and clear guidelines presented in a very attractive visual way.

However, I’ll have several calls with authors to take notes of their suggestions for the workshops so they are tailored to our needs.

With all this effort, I hope to be able to give back to our authors in a more visible, tangible way, and in doing so this will encourage better participation from the team. I also hope this goal will result in:

February 2018 will be used to organize the workshops and brainstorming spaces, with the idea of the workshops beginning to take place in March 2018.