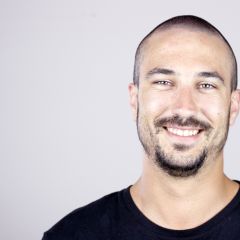 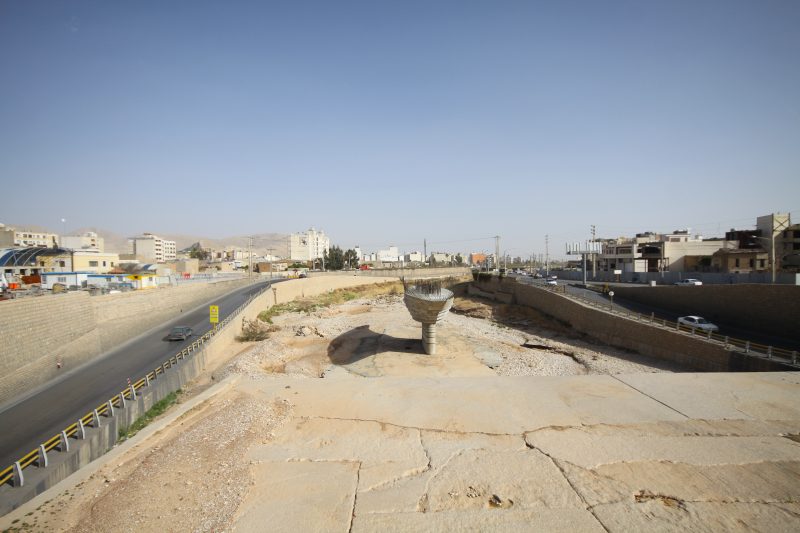 The Khoshk river, which flows seasonally at the heart of Shiraz, is called the “Dry River” by its residents. View from Hafez Street. Photo by Yann Leymarie, free of rights.

The interviewees’ names have been modified to protect their identity. Water scarcity is an issue taken very seriously in Iran.

It's a peculiar moment for the Islamic Republic of Iran. Between the nuclear negotiations, the geopolitical crises in Syria and Yemen, and various movements against the ways authorities work to undermine human and women's rights in the country, the moderate government of Hassan Rohouni's mandate to serve the people of Iran is full of many hurdles and challenges.

Despite these heavy confrontations, there is a silent but absolutely fearsome concern: the environmental crisis. From Kashan to Shiraz, we toured multiple cities in Iran a few days before Nowruz, the Persian New Year (celebrating the arrival of autumn between the 20th and 21st March), and noticed the damages caused on the water resources in the country. Between the manifestations of a deteriorating environment; international sanctions; agricultural exploitation; demographic explosion and an unreasonable water management system, Iran is for the first time facing an enemy it cannot fight on its own. In a place where most of the relationships are already very tense on the topic of water, Iran might also be putting in its two cents in the coming months. 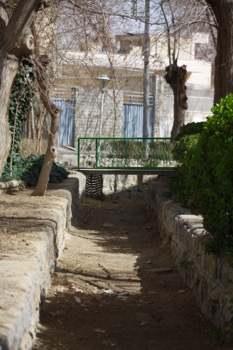 An example of the Madi at the heart of the Armenian area of Isfahan. Drawn by  Sheikh Bahai at the end of the 16th century, this canal network allowed water propagation from the Zāyandé-Rūd river in the city streets. Photo by Yann Leymarie, free of rights.

Although water was often at the heart of Persian stories, it wasn't always an issue. Indeed, the Persian civilization often was at the peak of technological and architectural innovations in order to ensure a reasonable and adapted management of this widely-demanded resource. The Persian Qanat, an underground water channel that brings water from a well to the surface for drinking, were classified as World Heritage by the UNESCO in 2016. They are a 2,700-year-old underground networks, still allowing water distribution through underground lanes. However, because of the demographic explosion and the agricultural needs, these systems are now unable to provide enough water to fill all the new demands.

In Kashan, a city known to produce Iran's famous rose water, rose water producers relied on the underground water sources, that often flowed to the lower levels of houses in Kashan, for their production. A mill, naturally actuated by the motion of this underground water, allowed them to turn and crush the rose petals. Today, the production is artificial, as Ardashir, a farmer residing in the region, explains us:

The mill worked because of the underground water source for more than a century, but the flow has been insufficient since the last 8 years. Centuries worth of architecture are in danger. 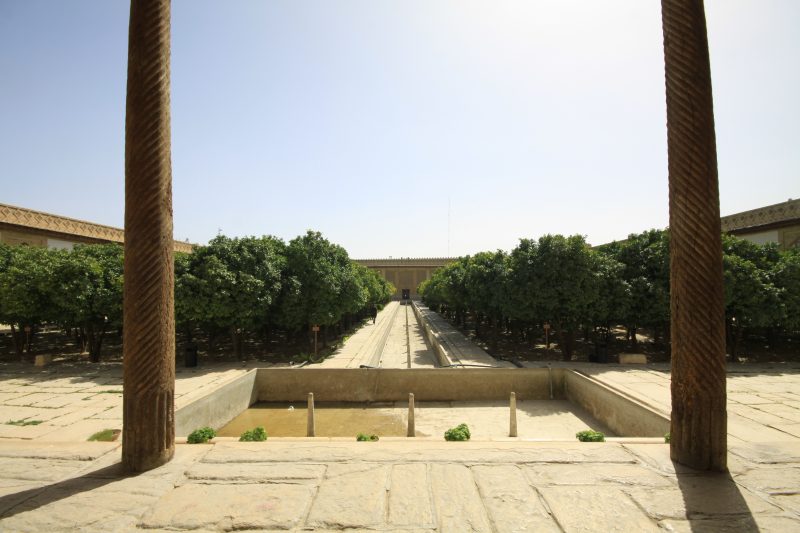 A symbolic photo of the use of water in Iran, the appearances of green and flourishing cultures are maintained by a constant artificial irrigation while clean sources remain dry. This is the orange reach of the Karim Khan citadel in Shiraz. Photo by Yann Leymarie, free of rights

Kaveh Madani is an environmental expert from the London Imperial College who was arrested and recently had to flee Iran. When questioned by Gelareh Darabi, a reporter who recently produced a film on the water crisis in Iran, he is adamant:  for him, humankind is  mainly responsible for the current situation:

I am not saying that nature does not have a consequence on that but we have drained all the water and this is all we have left.

1. A rapid increase of the population: Iran was a country of more than 80 million people in 2016, compared to 37 millions in 1979, following the government policies to push for a baby-boom. After years of free vasectomies in order to slow down birth explosion, Ayatollah Ali Khamenei declared being ready to see the country go over the 150 million mark.

2. A non-adapted and counterproductive agricultural system: for a long time the country's agricultural system was a pillar of Iranian life and employment, in particular during eight-year Iran-Iraq war.  Today it is one of the major causes of the country's water shortage because it utilizes 92% of the fresh underground water storage for a revenue of only 30%, falling below the world average. A perspective defended by Cyrus, a carpet seller at the Isfahan souk who has seen the evolution of the water crisis in the region of Isfahan:

The river needs water and snow, except that none of these came. Winter is very dry. And anyway, agriculture and industries are the priority, there is not enough water to open the river.

This viewpoint is also shared in Shiraz by Darius, Xerxes’ father [Ed's note: Xerxes and Darius are farmers and members of the host family of the author during his stay in Shiraz:]. He says:

Water is used in priority for agriculture, but they do not know how to use it. They drown the fields and water evaporates, it is an enormous loss.

In the city's outskirts, we can indeed find many rice fields spread through those of colza. The situation is ludicrous, it is about 25 degrees outside, the sun is at its zenith and we can clearly see flooded rice fields. We asked Xerxès to explain it to us:

Even if rice farming is forbidden by the law here, the government cannot or does not want to intervene because the economical situation is already really bad and people have to survive.

In a delicate politic and economical time, the Iranian government is turning a blind eye to avoid aggravating a social situation already very tense, by promoting cultures needing less water.

Many people have private gardens around Shiraz. Hundreds of meter squares with a construction and a swimming pool. It is now illegal to have a swimming pool without a permit, which are not given these days.

Xerxès’ sentence is symbolic of the Iranian's relationship with the blue gold. The country has continued using these water resources without thinking of the long-term impact. When asked by Al-Monitor, Claudia Sadoff, the general director of the International Water Management Institute, explains that:

90% of the population and the country's economic production are located in regions that are facing subtantial water constraints. 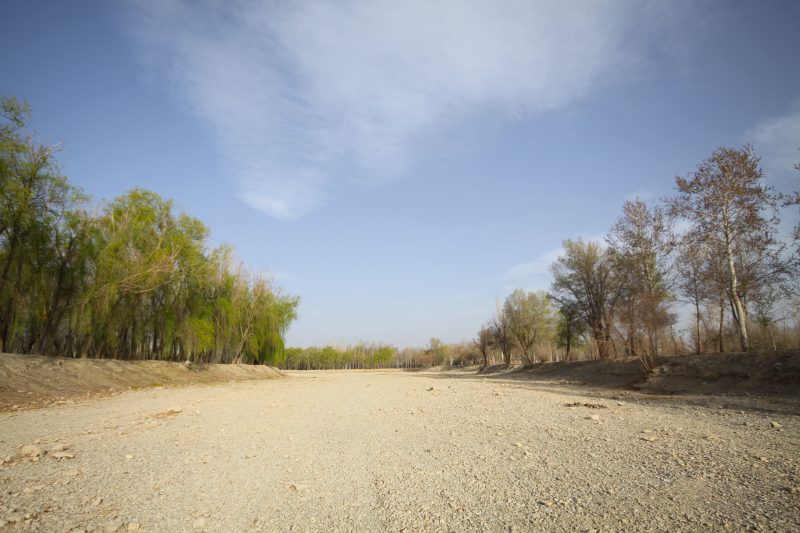 In the heart of the mythical Zāyandé-Rūd bed, the river which gave birth to the old city of Isfahan. Photo by Yann Leymarie, free of rights

Since the beginning of March, farmers from Isfahan Province have protested for weeks against the government because they feel like it has ignored the consequences of a drought that has plagued the region for a long time. The farmers’ protests have rallied around a simple slogan: “where has our river gone?”

Isfahan's now dried out Zayanderud, the famous river that flows through Isfahan, was one of the reasons the region was settled and was such fertile land for cultivation. The farmers of Isfahan are now battling unemployment because of the lack of water. Speaking with retiree Kambiz, who quit farming a few months ago, there is little hope the government would do anything to alleviate this environmental and economic disaster:

I don't think so (that they could open the river), the reservoir level is too low.

This general sense of pessimism about the government's efforts are not wrong. Even for Nowruz, when the government is often known for bestowing benevolent actions to help citizens, was a missed opportunity to help Isfahan's farmers. The river bed was still dry on the 20th March.

The situation in Isfahan shows the environmental and social crisis in which the entire country has been overwhelmed with for these past few years:  the disappearance of humid zones, the shrinking lakes and the massive desertification. In Shiraz, the Maharloo lake, a seasonal salt lake that is rich in potassium and other salts. The lake acts as a barometer of the water crisis, which Xerxès explains:

You cannot always judge water resources through river levels but more by their final reach. We are evaluating them based on the lake color: if it has a “water” color it is good, if it is pink(salt and other minerals’ color) it is not a good sign.

And when we asked them about the color of the lake at the end of the rainy season, the answer was brief and to the point:

But for Darius, his father, the real risk is on the long run:

It's simple. Here, the soil rests on layers of salt, one day it will expel salty water and then, it will be a real disaster.

Today the country cannot handle the situation by itself and the risk of dryness is becoming extremely worrying, as the simulation below shows it: 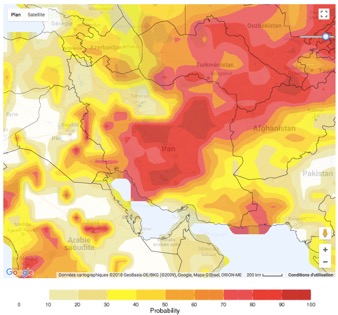 The probability of drought in the next 6 months from February 2018. Data from the International Research Institute for Climate and Society – Columbia University -Public Domain

While there could still be a potential national financial crisis in Iran, it is particularly complicated for international donors to support the government's environmental projects. In 2015, Russia had volunteered to find new groundwater resources in deserted zones, but experts remain skeptical. Iran has allowed political issues, of western encroachment, turn work and expertise on the environment into paranoia. The mass arrests of those involved in documenting the environmental crisis include the arrest and death of Kavous Seyed Emami.

For Darius, this is about a true cry for help:

On a besoin d’aide.