The three awardees of the first Boukary Konaté Award, in Bamako, Mali. Photo Doniblog, with permission

The passing of our Malian friend Boukary Konaté in 2017 was a shock and a huge loss for the GV community. It is a huge loss as well for African bloggers, and his friends and followers in Mali. Boukary is widely recognized as the ‘father of blogging’ in his native country, where his outgoing and generous personality, his labor of love to preserve African culture and languages online, are admired, loved, and missed.

His friends at Doni Blog Mali, the association of Malian bloggers he helped found, decided to create the Boukary Konaté Award to honor his memory. 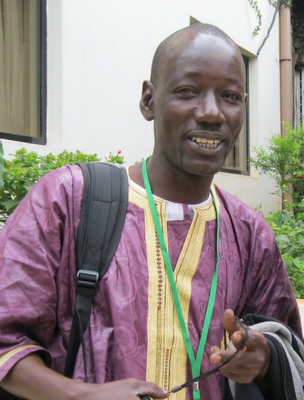 On December 27, 2018, the first Boukary Konaté Awards were handed during a social event in Bamako, with support from sponsors Philip Paoletta, Tuwindi, AGETIC, WoManager.

The first award went to Moussa Mallé Sissoko, for a portrait of a blind Malian musician. The second, to Randane Ould Barka for his contribution on the war-torn city of Timbuktu, the third, to Alhousseini Dicko, for his post on a priceless cultural heritage, the Timbuktu ancient manuscripts. The three bloggers are now published on a new Malian citizen news site, Bembere.

TM2, a national TV chanel in Mali, dedicated a segment of the evening news to the contest and the memory of a dearly missed Malian pionneer (video in French).