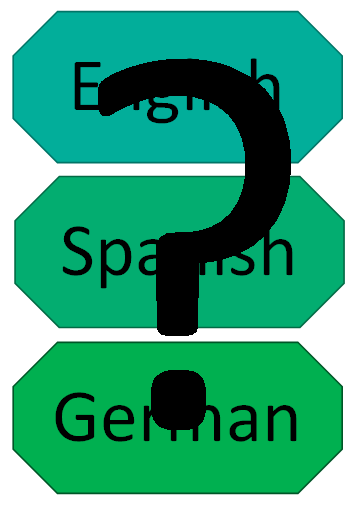 I suppose it's customary, in one's first blog, to do some sort of introductory statement or a brief synopsis of one's life experience. Seeing as how this is my first blog post, however, and my confidence in either one of those being remotely interesting to anyone is thus rather low, I'm going to forego such niceties and get straight to the point of this post.

You see, the idea smacked me in the face thanks to a friend's wedding. One of her friend's (whom I'll call “George” for this article) flew in for the event, so my husband and I hosted him all weekend. We tried to be very good hosts, showing him the sights and asking him what he thought about different things. Yet despite our efforts and excitement, we noticed that he rather stolidly kept saying things were “interesting.” For example:

Me: “George, what'd you think of the food at the brewery?”

George: “It was interesting.”

Me: “George, what did you think of that park?”

George: “It was interesting.”

We began to worry. Normally, the people in our lives only say something is “interesting” when they're trying to be gentle and polite and not tell you how horrible they really think something is. The only time “interesting” is a positive is when the speaker is jumping up and down and shouting, “Look at that! Isn't that interesting?!” What were we going to do?

Finally, at the wedding reception, George told me his amazing slice of cake tasted “interesting,” and I couldn't take it anymore. I had to ask, “George, what does interesting mean?” Poor guy. Turns out, he comes from a place that's rather more positive and literal. When he says something is interesting, he actually means it! (What a novel thought!)

After explaining to him how my husband and I normally hear the word used, I began to think about how odd it is that two people can be speaking the same, native language, and yet walk away from a conversation with two very different understandings. And I began to ask, how many times has this happened?

So I went looking (oh, the wonders of the Internet!).

When you want to order a soft drink, do you ask for a coke, soda, or a pop? Do you get a drink from a drinking fountain or a bubbler? Do you have a word for when the sun shines, but it's still raining? Most of those living in the U.S. don't, but a few do; they call is a sun shower. If your friend invites you over for supper, do you know when to show up?  You can find that and more on this website's analysis of Joshua Katz's data maps (based on data from Bert Vaux and Scott Golder).

And we all know there are confusing differences between British English and U.S. English. But don't worry, the Oxford Living Dictionaries have a handy list for bridging the meaning gap! When your American friend tells you she lives on the first floor, she means the ground-level floor, but your British friend would live on the floor above and call the ground-level floor the ground floor. And if you really want to delve into the differences, this  looks really handy. But what about other English-speaking countries? How many people would be confused by an Irishman telling them he's had a cat day because his professor gave out stink to him? Or by a Scotsman saying sadly saying she wa greetin’ last night. Do you know what an Australian means when she talks about neddies, drongos, and dunnies? If you're heading to New Zealand, do you know what rock melons or telegraph cucumbers are? Or what about a Canadian who tells you she won't be wearing her toque anymore, because the chinook blew through Van?

So, how does this tie in to translating? Simple: Be Aware. It's easy to fall into the trap of translating something into English like you always have (I know, because I've done it. Many times), but we all need to be aware of the needs of our clients and the target audiences. A South African will expect a small starter when ordering an entrée, whereas someone from the U.S. will expect a main course. If you're not translating for an English dialect you're familiar with, don't just assume your word choice will make sense! Make sure to chop-chop and do your research. And who knows? You might find the journey bad like yaz!