Meet Sanjib Chaudhary, the Contributor who Collects Stories of Interesting Characters for a Book 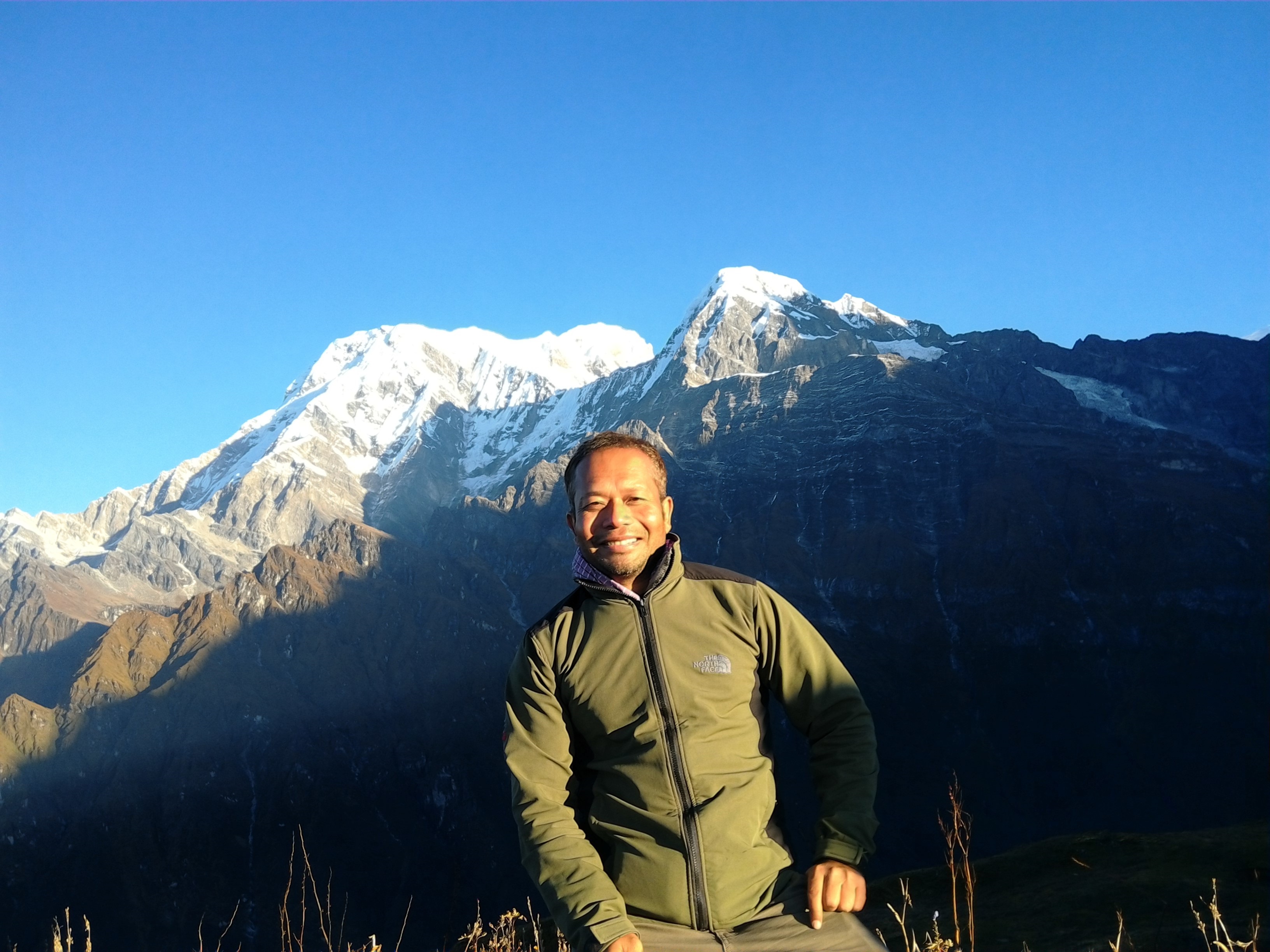 Sanjib at the viewpoint of Mardi Himal at 4200 m, Annapurna Conservation Area, Nepal. Behind him, we appreciate Annapurna South and Hiuchuli peaks. Image used with permission.

Global Voices interviews Nepali Lingua Editor, Sanjib Chaudhary, about his experience with GV and his life and work!

Sanjib Chaudhary: I’m a communications specialist by profession and blogging is my passion. Before joining Global Voices I was a regular contributor to OhmyNews International. Since OhmyNews closed down, I was searching for an appropriate platform to write about issues from Nepal not reported by the mainstream media and I stumbled upon GV. South Asia Regional Editor Rezwan went through my application and helped me with my first post and since then I’ve never looked back.

After attending the Summit in Cebu, Philippines, I brought together four volunteer translators and started GV Nepali Lingua with the help and guidance from Gohary. In spite of ups and downs within our team, we’re continuing with our translation into Nepali and we expect more translators to join our team in the future. Apply now!

Currently, I contribute to GV as Nepal author and also lead the Nepali Lingua together with co-editor Dilli Rai.

SC: Writing for GV and translating articles from around the globe and then editing them for Nepali audience has broadened my vision of the world. The articles published by GV authors give a totally different perspective about the current happenings around the world – different from what the mainstream media publish. I now always look at ‘both sides of the coin’ while writing a story.

GV: Does your work with GV impact your practice in your job?

SC: The social media scene has changed drastically in our region. Now mainstream media look for cues in the social media sites like Twitter and Facebook to ‘break the news’ which was just the opposite few years ago.

GV: Are you a blogger? If so, what place does your blogging hold in your daily life?

SC: I’m a regular blogger. I blog about Tharu (Nepal’s fourth largest ethnic group) culture and tradition in my blog Voice of Tharus. While I write about communications, knowledge management, marketing, branding and social media in A Communicator’s Diary, I write about my travel and personal experiences in YetaaUtaa meaning here and there in Nepali.

SC: I research and write stories for GV during the weekend. It’s the Saturdays and Sundays when I do the translation and editing as well. I also try to write blogs in the weekend. Whereas, I try to post on social media networks after office time.

GV: What gave you the idea of embracing other tasks, such as translating? How did this urge lead you to Global Voices?

SC: After attending the Summit in Cebu and talking with volunteer translators who had translated my articles, I felt the need to start GV Nepali Lingua. Since nobody had initiated it, I took the lead and started translating articles into Nepali.

SC: I had been translating stories and reports into English from Nepali and from English to Nepali for my work. The work was similar but a bit technical.

SC: My experience with GV has really helped me a lot – to be a better writer and translator. Besides, while writing stories, I think of different interesting angles to start and end the stories with and try to capture all different perspectives available and important.

SC: GV offers stories from around the world told through the eyes of volunteer authors and translators who try to tell the stories in a different way than what the mainstream media portrays. Also GVers care for the voice of general public and include them in their stories. While the mainstream media and online portals in Nepali just relay the translated version of stories published elsewhere, GV Nepali publishes GV stories translated into Nepali language which have something more to offer.

SC: When I’m not translating, writing or blogging, I travel, hike or read a book. Recently, I’ve started compiling stories of interesting characters that I met and interacted with in the last two decades. I plan to publish these stories in my blog or in the form of a book.

SC: Obviously, meeting with GVers in person during the Summit! It was great to meet with the editors and translators who had been helping me with my stories.

SC: GV Nepali at the moment has only two regular contributors and we’re planning to bring more translators on board. We’re approaching college students interested in translating GV stories. We hope that one of our regular contributors in the past will again start contributing once he recovers from his long time illness.

SC: Multilingualism is important — Since I was already speaking three languages from my schooldays, it was much easier for me to learn other languages. Each language is beautiful in itself and speaking to a stranger in their language makes you much closer to the person. And of course, you can empathise others well if you know their languages.

SC: I love translating articles related to indigenous technology and knowledge, environmental issues and interesting customs and traditions. I think it’s important to get these stories to Nepali speaking audience.

SC: Keep up with your hard work – you’re not only translating the stories but creating new content in your language which otherwise would not be there.

SC: I live in Kathmandu which is an open museum — temples, idols and ancient arts and architecture — everything rejuvenates you each time you visit them.

Nepal is a beautiful country and we’ve so much diversity here — the majestic mountains including Mount Everest in the north, lush green valleys and high hills in the middle and dense forests with tigers, elephants and rhinos in the south.

I’ll suggest going for Annapurna Circuit (one of the must-to-do treks before you die) and jungle safari in Chitwan and Bardia National Parks to nature lovers.

SC: I like to travel and read. Although I’m a chemical engineer by training, I’m passionate about writing and have groomed myself as a communicator. I’m also involved in social work and like working with communities to help them lead a better life.

For me, the world is a global village and I’m fortunate enough to have friends in most countries.